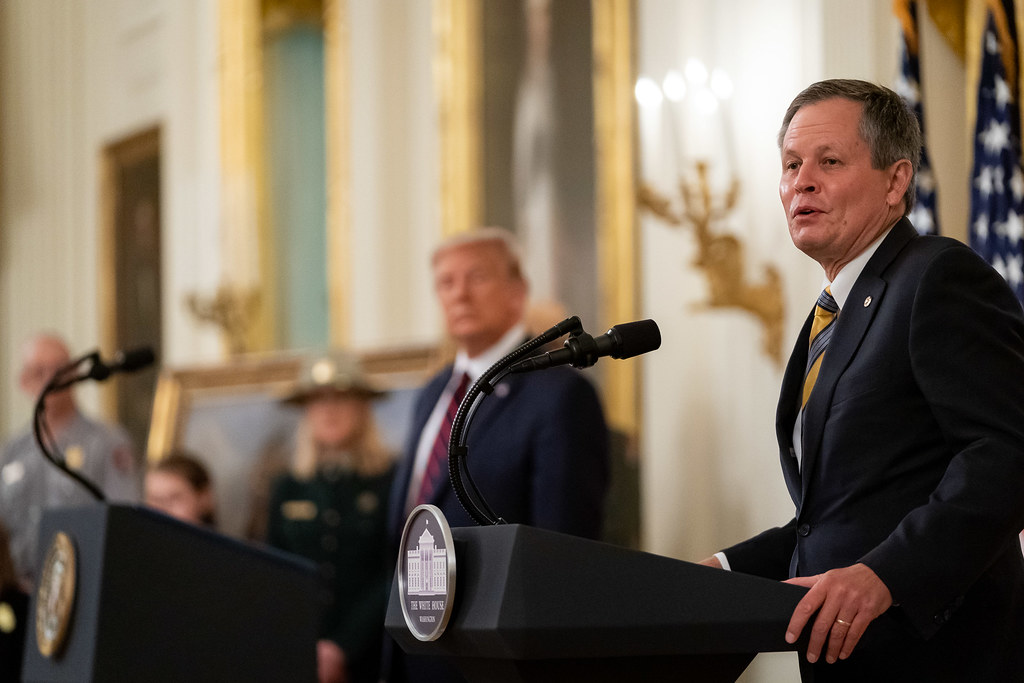 Since he came into office representing Montana in 2013, first in the House of Representatives as the at-large representative for Montana and subsequently as a senator, Daines has been the recipient of four FreedomFighter awards, holding an impressive 86 percent lifetime score on our congressional scorecard.

Demonstrating a commitment to limited and responsible government is a difficult task in Washington, even more so in the Senate than in the House, but it is clear Sen. Daines is up to the challenge. He consistently votes against large spending packages and for seemingly controversial amendments, often against the will of his own party leadership, because he knows these votes are correct.

Just in the past few years, he has supported many critical Trump administration nominees to their confirmations, including now-Justices Neil Gorsuch, Brett Kavanaugh, and Amy Coney Barrett to the Supreme Court, Ajit Pai to the Federal Communications Commission, Jim Bridenstine to NASA, Russ Vought to the Office of Management and Budget, Andrew Wheeler to the Environmental Protection Agency, and others. Much of President Trump’s pro-growth, pro-Constitution agenda would not be possible without these key confirmations that help to rein in executive overreach and right the balance of power between the three branches of our federal government.

Furthermore, he consistently votes against enormous spending packages in Congress that drive our nation deeper and deeper into a state of fiscal disrepair, opposing these irresponsible appropriations bills under both Democratic and Republican administrations alike. Such principle is hard to come by.

Under the Obama administration, Sen. Daines called a $1.1 trillion omnibus bill a “step back (in addressing) our nation’s worsening debt crisis,” and that “Montanans need real solutions to get our nation back on track, and paying for increased Washington spending on the backs of hard-working Montanans is not the answer.” Under the Trump administration, of a similar bill, he said, “The omnibus bill is a fiscal disaster that will take us deeper into debt and threaten our economy. Washington must get over its spending addiction and pass a responsible, balanced budget.”

Sen. Daines also champions countless initiatives that would move our nation further toward freedom, introducing his own legislation such as the A PLUS Act to increase school choice, the JOBS for Success Act to lift Americans off of government dependency, and the Balanced Budget Accountability Act to demand fiscal responsibility from Congress. He also is a cosponsor of legislation introduced by other liberty champions, like Sen. Ted Cruz’s (R-Texas) bill to prevent court-packing, Sen. Rand Paul’s (R-Ky.) bill to ban no-knock raids, and Sen. Mike Lee’s (R-Utah) bill to require CBO to show its work.

Perhaps most notably, Sen. Daines has been a champion of surveillance reform, reaching across the aisle to work with long-time surveillance reform advocate and fellow northwesterner Sen. Ron Wyden of Oregon in advancing protections against government abuse of Americans’ Fourth Amendment right to due process. Together, Senators Wyden and Daines introduced the Safeguarding Americans’ Private Records Act, S. 3242, a substantial set of due process and privacy protections that helped shift the debate towards stronger reforms as Congress debated reauthorizing expiring portions of the USA PATRIOT Act. An amendment derived from this bill later came just one vote shy of passing the Senate, representing a huge shift in terms of members’ willingness to confront the surveillance state.

On issues across the board and between both chambers of Congress, Sen. Daines has proven himself a legislator worthy of praise for his commitment to freedom and to the preservation of our great republic. It is our pleasure to recognize Sen. Steve Daines (R-Mont.) as our member of the month for November 2020 and we look forward to working with him for many years to come.