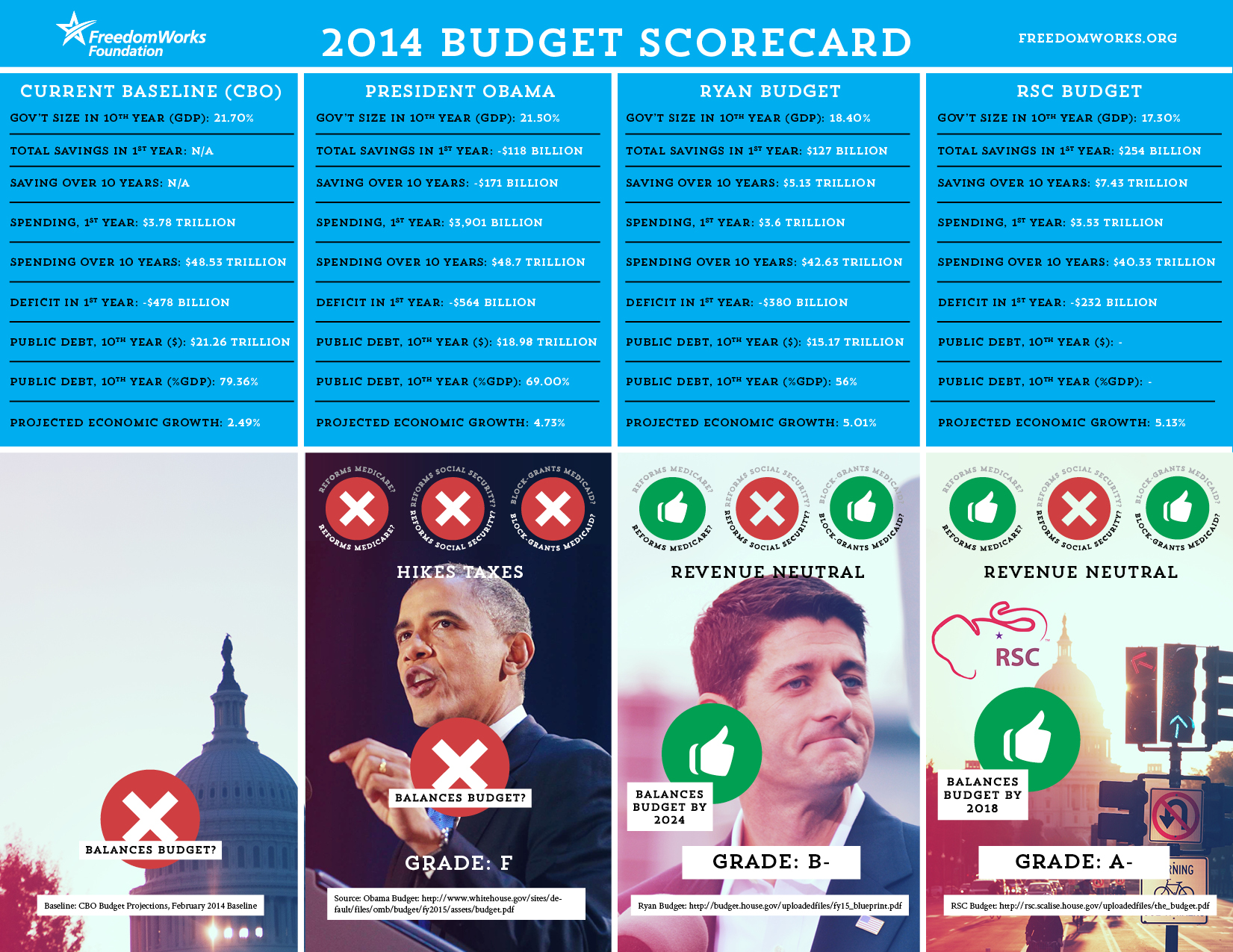 With Congress set to vote on Congressman Paul Ryan's Fiscal Year 2015 budget, and a number of alternate budget plans as well, FreedomWorks took a look at how these budgets would really affect our economy. Our focus was on three plans - those of President Obama, the conservative alternative budget offered by the Republican Study Committee (RSC), and of course Paul Ryan's own plan.

A budget resolution is non-binding, meaning that it only sets forth a spending framework within which Congress is expected to work. However, a budget resolution also allows its creator to offer forth a fairly comprehensive plan to reform large swaths of the federal government - from spending, to taxation, to entitlements, to regulation.

The handy scorecard reference chart above should help break down the main differences between each of these proposals. [You can download your own copy of the scorecard at the bottom of this post.]

So first let's look at the President's budget. It was yet again released well after the deadline by which the President is legally bound to release his plan, but perhaps he should have waited longer. The Obama budget would literally never start paying down the debt, despite its huge tax hikes. Although his budget claims to reduce deficits (largely through more taxes), a more realistic evaluation of its budget effect by the Congressional Budget Office (CBO) will almost certainly make the Obama plan's already-awful statistics worse. Thus the President gets a solid F, for failing to in any way address the out-of-control growth and indebtedness of our government.

Moving to the main attraction in the House, Congressman Ryan's plan. First, Ryan deserves some definite praise for several of the major reforms in his plan. First, he manages to balance the budget in ten years - an important milestone for conservatives. He also block-grants Medicaid to the states, implements a moderate tax reform, and repeals ObamaCare. Unfortunately, the Ryan plan balances the budget partially by keeping the massive increase in tax revenues passed by President Obama - repealing many of the specific taxes, but keeping the overall amount of your dollars collected. It also contains a Medicare reform that continues to force seniors into a government-run plan that is at best a halfway measure towards real, patient-centered, market reforms. And although Ryan's plan trims the bureaucratic state around the edges, it refuses to outright eliminate any significant portion of the massive spiderweb of executive agencies. Ryan could do better, and he receives a generous B- for effort.

Finally, the RSC's annual conservative alternative budget takes the Ryan framework and goes way further. It balances in an astonishingly short four years (by FY 2018). The RSC plan also block-grants the Medicaid and CHIP entitlements to the states, and includes the RSC health care reform bill (which fully repeals ObamaCare). It also reforms taxes, reins in many executive regulations, and implements the excellent RSC jobs bill. The plan does fall short in a few arenas, however, including relying on a very high level of revenues to fund its quick spending turnaround. The RSC health care plan contained in the budget is also a substantial improvement upon our current system, but falls short of truly patient-centered, free market reforms in its approach to Medicare. These policy quibbles aside, the RSC budget would dramatically shrink the federal government's overreach and overspending, and earns a solid A-.

In past years, Senator Rand Paul's budget plans have consistently been the gold standard for comprehensive government reforms, but it remains unclear whether the Senate will even bother pretending to honor their obligation to pass a budget plan, and at this time no Senate plans have been introduced for FY 2015.

Although none of the budget plans above will sneak by Harry Reid's Senate this year (even Obama's own budget, ironically), it is important for limited-government conservatives to bring their best ideas forth, to present a real alternative to our current path of uncontrolled, unsustainable spending and government overreach. The very fact that even the "establishment" Republican budget plan now achieves balance in ten years is a testament to how grassroots Americans have influenced the spending debate in Washington. And the presence of bold, workable reform plans like the RSC and Rand Paul budgets show how a return to a more limited government can be achieved in short order if we can get the right people into Congress.

(Credit to Aubrey Neal for help with research and number-crunching, and to Matt Battaglia for designing the chart.)

The House GOP budget proposal for the coming decade (2013-2022), released yesterday, is a mixture of boldness and caution, principle and compromise. Resembling and building on last year's House-passed "Ryan budget," the Path to Prosperity version 2.0 reads very much like a preview of a Romney Administration budget version 1.0. While not nearly as bold and principled as these debt-drenched times require, it would still be a major improvement over the status quo, and much better than what President Obama and congressional Democrats envision, namely, ever-bigger government.

1
03/21/2012
From "Billions to Trillions": Why This Week's House Budget Vote Is So Crucial
"https:\/\/www.freedomworks.org\/content\/billions-trillions-why-weeks-house-budget-vote-so-crucial?social=facebook_share"
null
https://fw-d7-freedomworks-org.s3.amazonaws.com/styles/thumbnail/s3/te_social_media_share/fw_default_0.jpg?itok=35IWEBMb
Blog

From "Billions to Trillions": Why This Week's House Budget Vote Is So Crucial