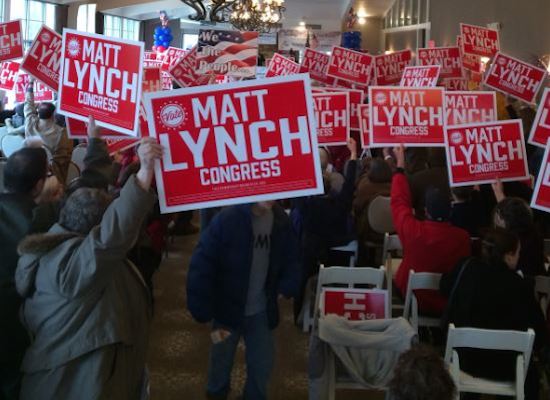 Washington, DC- In a room full of grassroots activists, FreedomWorks for America spokesman Adam Brandon announced the endorsement of Matt Lynch for U.S. Congress in Ohio’s 14th district. Matt Lynch is the clear conservative choice for the Ohioans looking to advance individual liberty and reduce the size of government.

Brandon commented, “Matt Lynch has clear support of the grassroots activists across the district. He is ready to fight against the Common Core takeover of education and advocate for a simplified and flat tax code. He signed onto a lawsuit to stop Medicaid expansion in Ohio, and co-sponsored a bill to reform Ohio’s public pension system. Matt Lynch doesn’t just identify problems in government, he works towards the solution.”

“Ohioans are ready to take their government back from special interests. David Joyce is a bought-and-paid-for politician backed by the lobbying class and Republican establishment. His supporters range from House Speaker John Boehner to the trade and transportation unions that gave him tens of thousands of dollars. The citizens of the 14th district deserve leadership in Washington that will represent them, not unions and special interests.”

ABOUT FREEDOMWORKS FOR AMERICA: FreedomWorks for America is a grassroots service center to a community of over 6 million activists supporting candidates who believe in individual liberty and constitutionally-limited government. For more information, please visit www.FreedomWorksforAmerica.org or contact Jackie Bodnar at JBodnar@FreedomWorks.org.