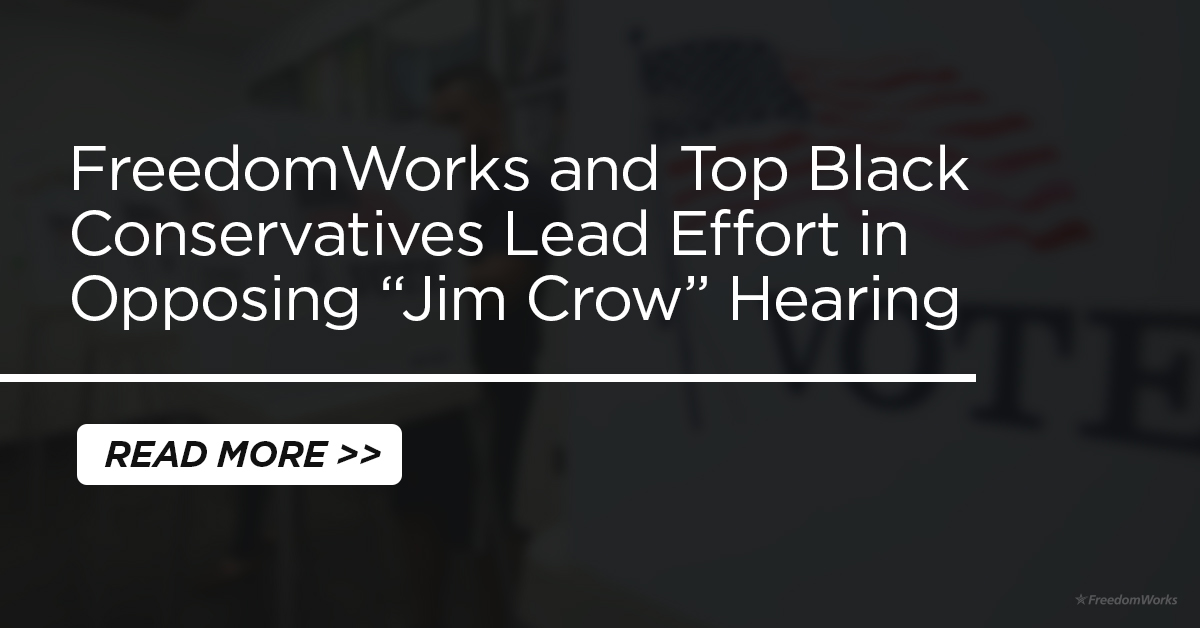 “I, along with the signatories of this letter, have experienced true racism in Jim Crow America. To refer to laws, like voter ID requirements, that bolster election integrity and make our elections truly fair and free is to cheapen the experience and valor of black Americans who experienced horrible injustices fighting for their rights in the Civil Rights Movement.

“For the sake of preserving the American electoral process, we ask that the use of the term 'Jim Crow' is stopped as a means to advance a partisan agenda, and that Senators do not advance H.R. 1 or S. 1 any further in the legislative process, but instead listen to the voices of “We the People.”

The full letter and signatories are pasted below and can also be found in a shareable PDF here.

We write to you today in fierce opposition to H.R. 1 and S. 1, the “For the People” Act, and specifically so in response to the recent rhetoric surrounding the push for election reform in the interest of election integrity. We are disheartened to hear the term “Jim Crow” used to describe reforms such as photo identification (ID) laws. As individuals who have lived through and experienced the American civil rights movement, we wholeheartedly condemn the reckless, dangerous rhetoric of those in Washington, D.C. who inappropriately employ racially charged language to advance a faulty and dangerous political agenda.

We have experienced true racism. We have seen the ugly face of prejudice based solely on the color of one’s skin. Requiring photo ID for voting is not racism, and it most certainly is not a return to “Jim Crow.” To say otherwise cheapens the lived experience of black Americans who suffered horrible injustice under the institutionalized racism of the late 19th and early 20th centuries. The valor of those who fought the true war for civil rights is being stolen and dishonored by so flippantly invoking the name “Jim Crow.”

Furthermore, to claim that legislation such as H.R. 1 and S. 1 is akin to the struggle for civil rights amounts to nothing more than valor stolen by power-hungry politicians in Washington. Black Americans did not partake in the struggle for equal rights and representation only for the very electoral process -- for which we fought so hard -- to be undermined. To suggest that the “reforms” in this legislation are truly in the interest of black Americans is infantilizing at best. We the People deserve better.

H.R. 1 and S. 1, and any attempt to weaken our electoral safeguards, only serve to damage election integrity in America. In fact, there is widespread support for voter photo ID laws among black Americans -- and all Americans. Recent surveys show that 69 percent of black voters believe that photo ID is “common sense” for voting. If H.R. 1 is truly “For the People,” it would not include provisions that inhibit states’ implementation of photo ID laws.

In the interest of preserving the American electoral process, which countless black Americans fought so long and so hard to be a part of, we ask that you refrain from using the term 'Jim Crow' as a means to advance a partisan agenda, and do not advance H.R. 1 or S. 1 any further in the legislative process, instead listening to the voices of 'We the People.'”

Key Vote YES on the Conference Report for the Tax Cuts and Jobs Act, H.R. 1