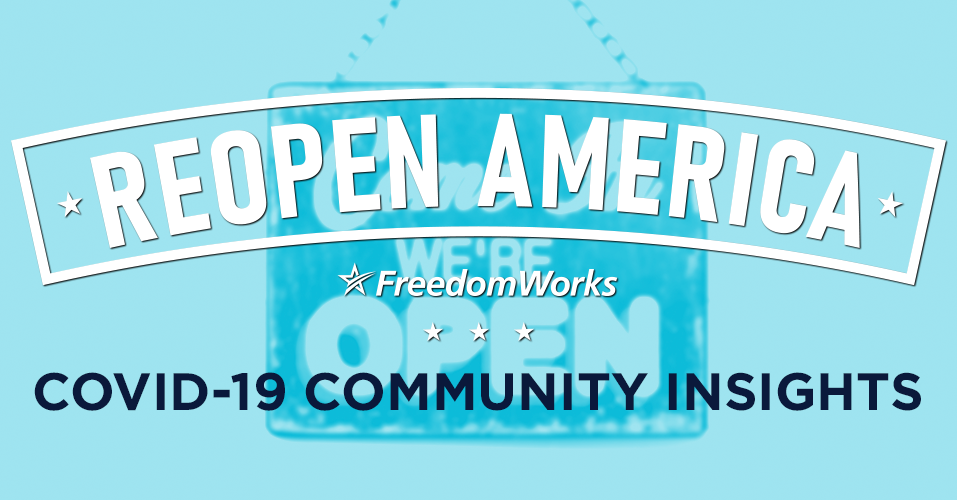 FreedomWorks continued measuring the COVID-19 pandemic’s stranglehold on America, as well as support amongst our followers to begin moving the country forward, with a survey conducted on April 24.

87% of respondents to the April 24 survey reported they support quarantine restrictions being eased within two weeks. 75% of these individuals say they want this to happen immediately. This is 30% more than the individuals who stated they wanted this to happen when asked the same question in an April 1 survey.

Those in the active labor force altogether have had their livelihoods devastated. 19% of these individuals report being laid-off due to the effects of the pandemic. Another 19% of the labor force reported they have faced pay cuts due to COVID-19. Over half of those who have had their income reduced are self-employed individuals, a group which includes small business owners. 26% of these respondents state they are facing reduced hours due to the pandemic.

FreedomWorks asked survey participants to rate their satisfaction with the actions their state governments have taken to counter the pandemic on a scale of 1 to 10 (1 being not satisfied, 10 being very satisfied). Overall, the average rating for state governments was 5.5, with self-employed respondents reporting the lowest average of 5.0.

As protestors across the nation call for their state governments to ease statewide quarantine restrictions, one-third of FreedomWorks’ audience says they are interested in participating in these rallies. 8% of the survey’s participants say they have already called for their governor to end these restrictions at a physical protest. Self-employed individuals showed the most support for these protests, with nearly half saying they would be interested in actively participating in a rally. 12% of these respondents said they have already participated in them.

This data shows that an abundance of FreedomWorks activists, especially those who have lost the most, are ready to start to reopen America and resume their lives. While many have lost their means of supporting their families, they want the ability to begin picking up the pieces and get back to work. FreedomWorks will continue to look into how our activists’ lives improve or falter with continued lockdowns in some states and reopening measures in others.

Note: This survey was conducted with a random sample of the FreedomWorks general email and text lists on April 24. These individuals are actively engaged in their community, as well as in conservative political movements. This survey was done at the 95% confidence level with a confidence interval of 1.1%.