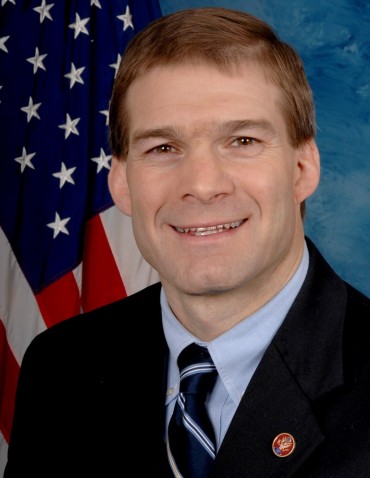 Rep. Jordan represents Ohio's 4th District and is our Congressman of the Month for January

The past year was an important one for defenders of liberty. To be sure, there were some defeats as the tide of big government rolls ever onward, but there were some important victories and milestones as well. 2015 saw the closure of the Export-Import Bank for the first time in 80 years, a lifting of the ban on crude oil exports, new limitations on the government’s ability to spy on American citizens, and some important reforms to the justice system across the nation.

Perhaps most important of all, however, was the formation of the House Freedom Caucus in Congress, a group of legislators committed to fighting for small government and individual liberty. After receiving a vote from Rep. Tim Huelskamp in January to replace John Boehner as Speaker of the House, Jordan co-founded the House Freedom Caucus and was elected its first chairman, and recently reelected to a second term in that office.

The attempt to oust Boehner didn’t stop there. After a resolution from fellow-House Freedom Caucus member Mark Meadows calling for a vacation of the Speaker’s chair, the influence of Jordan and the Freedom Caucus created an environment that essentially forced Boehner’s resignation, lest he be ousted by a looming floor vote.

In evaluating potential replacements for Boehner, the Freedom Caucus as a whole was adamant that they would not support anyone who didn’t commit to serious process reforms—a restoration of regular order, allowing debate and amendments on bills, and stopping the previous process of punishment Members for voting against leadership on procedural motions. When he Caucus ultimately backed Paul Ryan as Speaker, it was because he agreed to govern with these principles in mind, although the extent to which he follows through on these changes will only really be tested for the first time in the coming weeks.

The Freedom Caucus has also been effective as a voting bloc, fighting to allow votes on conservative amendments before allowing major legislation to move forward. The group’s tight cohesion means that Republican leadership cannot ignore their votes if they want to advance a legislative agenda.

As a congressman, Jordan’s focus is on fulfilling the promises he made to voters, being unwilling to back down on issues he pledged to fight for. His colleagues speak highly of him, with Rep. Mick Mulvaney commenting on his reelection as chairman, “why change the coach if you’re winning?”

For his tireless work as the chairman of the House Freedom Caucus, we’re proud to name Jim Jordan our Congressman of the Month for January, 2016!