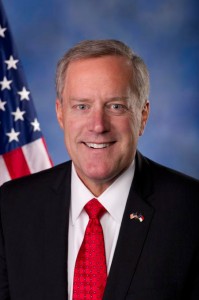 Rep. Meadows represents North Carolina's 11st District and is our Congressman of the Month for October.

September was a big month for the House of Representatives, with the unexpected announcement that Speaker John Boehner would resign his seat in Congress, paving the way for new, more representative leadership.

If there is any one man who can be credited with this victory, it would have to be Congressman Mark Meadows. Meadows was elected to North Carolina’s 11th District in 2012, and has since proven himself as a man of principle, willing to stand up to the leadership of his own party when he believes them to be in the wrong.

Such devotion to ideas does not come without cost, however, as Rep. Meadows discovered when he opposed Speaker Boehner on a procedural vote. Following the vote, Meadows was stripped of his subcommittee chairmanship as a form of punishment for failing to toe the line.

When news of this petty retribution reached the grassroots, an uproar of support for Meadows ultimately forced leadership to reverse the decision and restore Meadows to his rightful place. It was not the last time Meadows would force Boehner’s hand.

Shortly before Congress left on its August recess, Rep. Meadows introduced a resolution, cosponsored by Rep. Thomas Massie, airing a list of grievances with Boehner and calling for him to vacate the Speaker’s chair. In addition to his propensity to exact revenge on Members who voted against him, these grievances included: consolidating power and excluding rank and file Members from the decision making process; violating the rule that congressmen as supposed to have three days to review legislation before voting on it; using voice votes to keep Members off the record, so they could hide their votes from constituents; and limiting the ability of Members to offer amendments and stimulate debate on legislation.

During August, Members heard from their constituents back home. The overwhelming message: Boehner had to go. FreedomWorks alone drove over 200,000 messages to congressmen across the country calling for new leadership in the House. As Congress returned to Washington and began to negotiate over a government funding bill, the number of Republicans prepared to vote against Boehner reportedly swelled to as many as 70.

With the Meadows resolution hanging over his head, Boehner finally capitulated in order to spare the embarrassment of being voted out by his own party, or of having to be rescued by Democrats. The grassroots had spoken, making it clear that they would hold leadership accountable for their failures to, well, lead.

Without the actions of Rep. Mark Meadows, none of this would have been possible, and for that, we are proud to name him FreedomWorks’ Congressman of the Month for October!