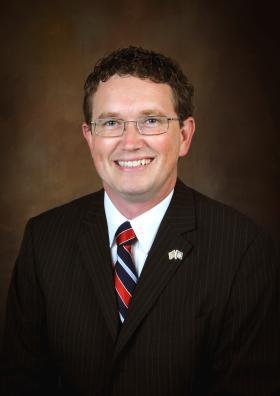 Rep. Thomas Massie represents Kentucky's 4th District and is our Congressman of the Month for December.

Thomas Massie is a remarkable Member of Congress, as well as a remarkable man. With a master’s degree in mechanical engineering from the Massachusetts Institute of Technology, he’s one of only a few Congressman with a science and technology background. After an impressive career in the private sector, where he developed many of his own patents, Rep. Massie repaired to his hometown in Kentucky where he built his own house and operates a functional cattle farm.

Elected to Kentucky's 4th Congressional District in a special election in 2012, Massie has fought tirelessly to limit the intrusion of the federal government into the lives of American citizens. He holds a lifetime score of 95 percent on the FreedomWorks Congressional Scorecard, one of the highest of any multi-term Member.

Massie’s passion for individual liberty has manifested itself in all sorts of ways, great and small. He was the author of a strongly-worded amendment to the defense appropriations bill that would have severely limited the government’s ability to engage in warrantless spying, one of the most hotly contested issues among liberty warriors in the last few years. He’s also the sponsor of the DRIVE Act, which would end the diversion of highway funding to other projects like mass transit, and ensure that the funds were only used for their intended purpose.

Apart from these major issues, Massie also devotes time to more local concerns close to his heart. For example, he routinely introduces the Milk Freedom Act every year, to allow farmers to sell unpasteurized milk to willing consumers. These may seem like small issues to Beltway insiders, but Massie understands their importance to local entrepreneurs and consumers alike.

Rep. Massie is also known for being a devoted advocate of transparency and accountability. Nowhere is this more evident than in his celebrated “500 yard dash,” in which he runs from his office to the House floor to demand that votes be recorded rather than conducted by voice. It should come as no surprise that many legislators would rather keep their votes off the record, but Massie believes that the American people deserve to know how their representatives voted on controversial issues. Only through strict accountability can we expect to improve the operations of government.

FreedomWorks has learned that Thomas Massie can always be counted on to do the right thing, even at times when doing so may be unpopular. In recognition of his unwavering commitment to preserving our freedoms and holding government’s feet to the fire, FreedomWorks is proud to name Thomas Massie our Congressman of the Month for December.