FreedomWorks Continues to Measure Effects of Coronavirus on the Grassroots 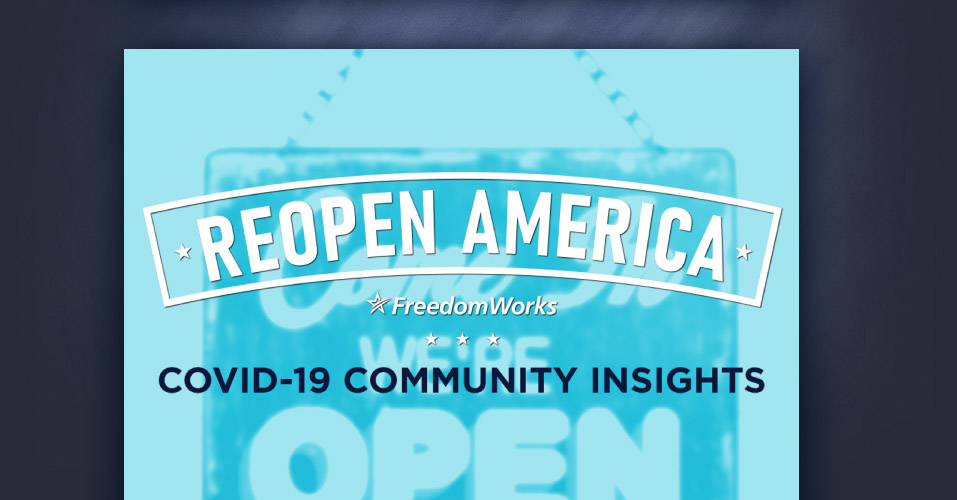 Over the past weekend, FreedomWorks conducted two new surveys measuring the effects the COVID-19 crisis has had on our audience, as well as their anticipation to get back to work.

The first survey was delivered to a random selection of FreedomWorks’ email list on Friday, April 10th. This poll segmented respondents by their employment type to gain insight into how the different groups viewed the economic consequences of stay-at-home orders, as well as other governmental mandates and packages. The second survey, sent to a random sample of FreedomWorks’ text message list the following day, divided individuals into groups who wish to see their stay-at-home orders lifted and those who do not.

Both surveys showed that the majority of FreedomWorks activists, especially those in the workforce, desire to see America get back on track. The April 11th survey showed that 56% of individuals under quarantine mandates want those to be lifted. Over half of this group is working or searching for work.

Drastic effects from these measures may be the source of the overall desire of employed individuals to get out of their homes. In the April 10th survey, 65% of respondents who are currently unemployed report they lost their job due to the economic consequences of the pandemic. 17% of employed workers say some of their co-workers have been laid-off due to the crisis, and 19% have someone in their household who has been laid-off.

The April 11th survey only further demonstrated these trends. Of those who wish to end the quarantine, 21% report they or someone in their household has been laid-off due to the pandemic.

Respondents to the April 11th survey showed their disappointment with governmental actions on the pandemic. When asked to rate their approval (on a scale of 1 to 10) of the actions taken by the U.S. Congress, respondents who want quarantine measures to be lifted reported an average score of 3.2. Those who want quarantine measures to stay in place reported an average of 4.0.

The April 10th survey showed respondents’ disagreements on what steps should be taken, aside from removing barriers keeping Americans indoors. When asked to select specific measures proposed by Democrats and Republicans in Congress they would support in a Phase-4 bill, not a single measure received a majority of votes. The supplement with the most favor, however, was tax relief, with approximately 40% of individuals in favor of the measure.

While moving forward will prove to be difficult, with most Americans facing extreme restrictions on their lives and work, the majority of FreedomWorks activists want to try. Their desire to regain freedom from their homes and to reopen America is evident, and FreedomWorks will continue to measure the devastations they have faced and hopes they have for the future.