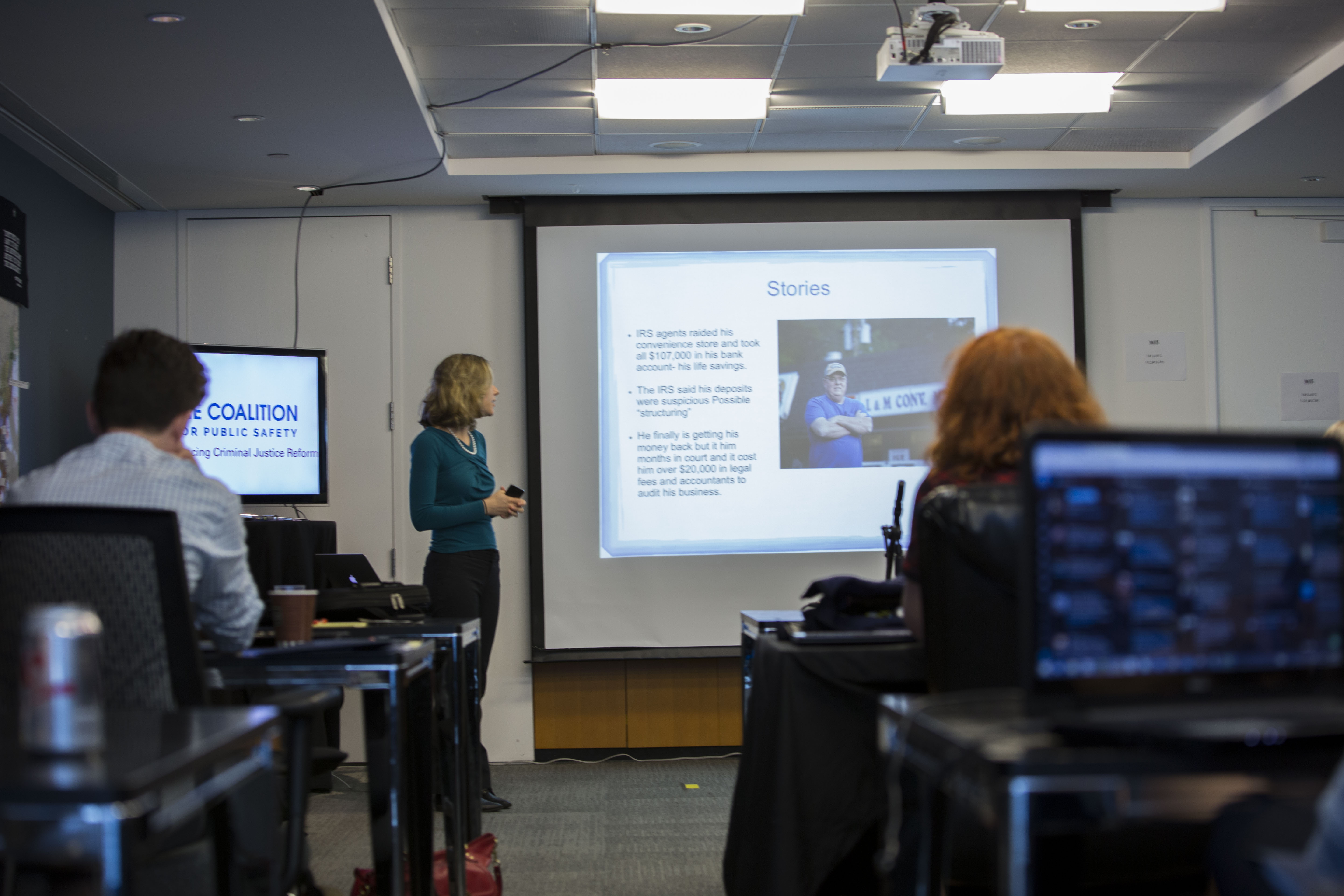 On Monday, May 18, FreedomWorks and the Center for American Progress hosted a joint Justice Reform Briefing. FreedomWorks invited journalists and bloggers from inside and outside the Beltway to attend the event, handing them literature featuring justice reform-related issues, including Justice for All: 5 Principles for a Better Justice System.

At the morning session hosted at FreedomWorks’ office, conservative and libertarian bloggers heard presentations from speakers on specific justice reform issues on which we have spent much of our efforts. Our staffers went over reform efforts in the states, which have been led predominately by Republican states, and legislation in Congress to reform federal civil asset forfeiture laws and mandatory minimum sentences.

Julie Borowski gave a great presentation on civil asset forfeiture, emphasizing the problems this bad policy presents for innocent people, their property, and their constitutionally guaranteed right of due process.

Molly Gill of Families Against Mandatory Minimums discussed the unfairness of mandatory minimum sentences. She told heartbreaking personal stories of people who were prosecuted under this particularly terrible brand of big government in the courtroom.

Former Virginia Attorney General Ken Cuccinelli offered the conservative case for justice reform and spoke on overcriminalization in federal law, noting that there are so many criminal statutes on the books that they cannot even be accurately counted.

“The best part about the Justice Reform Briefing,” said Taylor Millard, a blogger and podcast host at Vigilant Liberty Radio, “was finding out about actual examples of how mandatory minimums are unfair and statistics on what the government pulls in on civil asset forfeiture versus criminal forfeiture.”

The morning session at FreedomWorks was only the beginning.

At noon, we traveled to the Center for American Progress (CAP), where our bloggers joined their staffers, journalists and bloggers for a joint lunch session featuring Christine Leonard of the Coalition for Public Safety and a three-part joint afternoon session moderated by policy experts from left and the right.

Vikrant Reddy of the Charles Koch Institute and Chelsea Parsons from the Center for American Progress moderated the afternoon discussion on prison reform for American Progress. Logan Albright from FreedomWorks and Sakira Cook from the Leadership Conference led the discussion on civil asset forfeiture. And Benji McMurray from the office of Sen. Mike Lee (R-Utah) and Jesselyn McCurdy from the American Civil Liberties Union guided the conversation on sentencing reform.

Bloggers and staffers representing both FreedomWorks and the Center for American Progress engaged each other openly and honestly. Nothing was off limits during the discussion. The bloggers with FreedomWorks showed a tremendous depth of knowledge on all the issues discussed at the morning session and learned a lot from their counterparts with the Center for American Progress during their afternoon session.

“I enjoyed the two parts of briefing because the FreedomWorks part armed me with a plethora of facts and stories I was unaware of that will help me make my cases in writing,” said Jessica Szilagyi, who writes for the Georgia-based blog, Peach Pundit.

“The part of the summit at the Center for American Progress was great for messaging because of the open forum and honest discussion that circulated, offering fears and needs from many sides of the justice reform message,” she added.

Even though they will never agree on a host of contentious policy issues, both sides walked away from the summit knowing that they found common ground with unlikely allies on justice reform to bring fairness back into the system, while reducing costs to taxpayers and lower crime and repeat offender rates.

On Wednesday, May 18 FreedomWorks Director of Communications Jason Pye traveled to Columbus, Ohio to be part of a panel for the Fair Sentencing and Fair Chances National Tour by the Coalition for Public Safety. The panel was co-hosted by the Buckeye Institute and focused on a bipartisan push for justice reform.

Justice Reform Panel Discusses How We Got Here

On Thursday, the Coalition for Public Safety hosted a briefing, “The Need for Criminal Justice Reform: How Did We Get Here?,” with coordination with the congressional House Criminal Justice and Public Safety Caucus, co-chaired by Reps. Jason Chaffetz (R-UT), Hakeem Jeffries (D-NY), Raul Labrador (R-ID), and Cedric Richmond (D-LA). This briefing highlighted the major policy decisions that have led to a dramatic increase in the federal prison population and serious problems in federal sentencing policies.

Today the Coalition for Public Safety kicked off its Fair Sentencing and Fair Chances National Tour with a panel of distinguished advocates for criminal justice reform efforts. The diverse group of organizations included in the panel ranged from participants associated with the ACLU to Americans for Tax Reform. Senator Ron Johnson (R-Wis.) and Congressman Bobby Scott (D-Va.) headed the discussion by presenting their personal interests and efforts in achieving meaningful reform with the nation’s justice system.

0
09/17/2013
Will An Updated Marketing Effort Help the NRSC In 2014?
"https:\/\/www.freedomworks.org\/content\/will-updated-marketing-effort-help-nrsc-2014?social=facebook_share"
null
https://fw-d7-freedomworks-org.s3.amazonaws.com/styles/thumbnail/s3/te_social_media_share/fw_default_0.jpg?itok=35IWEBMb
Blog