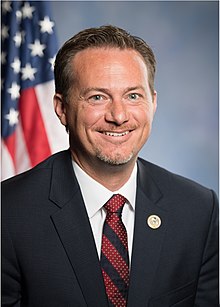 We appreciate that Rep. Cloud has brought his stellar expertise as a business owner and longtime grassroots conservative leader to Congress. First elected to Congress following a special election in June 2018, Rep. Cloud has proven true to his campaign promises to defend liberty and advocate for fiscal conservatism. Along with many fiscally conservative allies, Rep. Cloud took a righteous stand against the party leadership and voted against the disastrous Bipartisan Budget Act of 2019.

During a much publicised hearing about the rise of youth vaping, Rep. Cloud was one of the only legislators that spoke of harm reduction and individual liberty. While lawmakers on both sides of the aisle spoke of tightly controlling the industry, Rep. Cloud rightly asserted that, “We must recognize the potential for innovation to lead to less harmful products.” Taking such a stance is just one instance among many when Rep. Cloud has stood up to defend our individual liberties for the betterment of all Americans.

Another area that Rep. Cloud has been particularly strong is congressional oversight and fiscally conservative budgeting. Introduced by Rep. Cloud earlier this year, the Cost Estimates Improvement Act, H.R. 638, is just one example of his stellar record in these areas. The Cost Estimates Improvement Act would require the Congressional Budget Office (CBO) and the Joint Committee on Taxation (JCT) to include the cost of servicing the debt in their cost-estimates of legislation. The bill would also require the CBO and JCT to list any federal programs or initiatives with overlapping or duplicative goals covered by the legislation to be listed in the cost estimates.

With the servicing of our national debt becoming an ever larger piece of federal spending, it is absolutely crucial that our legislators receive accurate information with regards to costs. Since their inception, this has been the goal of agencies like the CBO “to provide the budget committees and the Congress with objective, impartial information about budgetary and economic issues.” Yet, as Rep. Cloud aptly pointed out, “Congress ignores the cost of new interest payments when considering how expensive proposed legislation would be.”

Additionally, our government wastes millions of dollars every year by financing overlapping or otherwise redundant programs. A recent audit of workforce development programs cited by the White House found that the federal government operates 40 different workforce development programs across 15 separate federal agencies. Clearly, our federal government needs to realign and streamline. Rep. Cloud’s Cost Estimates Improvement Act would address both of these issues, providing legislators with all of the information they need to make smart fiscal decisions.

In addition to championing his own important reforms, Rep. Cloud has proven to be a team player, joining with other allies of liberty to support such legislation as Rep. Jason Smith’s (R-Mo.) Death Tax Repeal Act (H.R. 218), and Rep. Gary Palmer’s (R-Ala.) Retirement Freedom Act (H.R. 2108). Rep. Cloud has also signed on in support of his fellow freshman Texan Rep. Chip Roy’s Healthcare Freedom Act, H.R 3594 which would greatly expand individuals’ ability to take control of their own healthcare independent of their employer.

During his first term in Congress, Rep. Michael Cloud has demonstrated the tenacity and principled legislating that is far too uncommon in our nation’s capital. We look forward to supporting Rep. Cloud’s continued efforts to improve congressional oversight and expand free-market principles throughout our nation. We are proud to name him as our member of the month for August 2019.