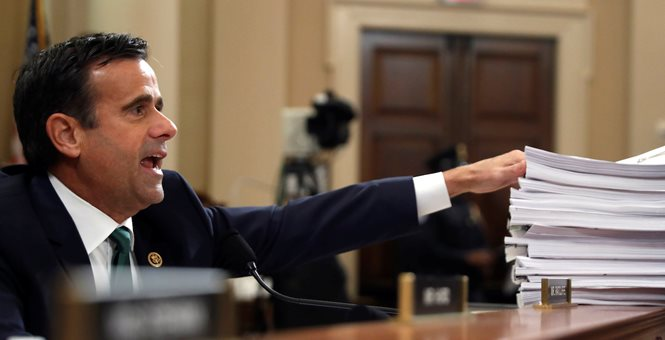 The youngest of six children to parents who were both school teachers, Rep. Ratcliffe grew up northwest of Chicago, received an undergraduate degree from University of Notre Dame in nearby Indiana, and thereafter moved to Texas in the Dallas area to pursue a law degree at Southern Methodist University (SMU). He graduated from SMU with a juris doctorate in 1989.

Following just over a decade of private practice in law, Rep. Ratcliffe was elected to four consecutive terms as mayor of Heath, Texas -- a small town outside of Dallas -- from 2002 until 2012, during which he also served as Chief of Anti-Terrorism and National Security for the Eastern District of Texas and then as interim U.S. Attorney for that district.

In 2014, Rep. Ratcliffe successfully challenged 17-year incumbent Rep. Ralph Hall in Texas’ 4th Congressional District by winning a runoff and was sworn into office in January 2015. Since then, he has represented his constituents well in fighting for liberty. He holds a lifetime 85 percent score on FreedomWorks’ Congressional Scorecard, with his highest score of 95 percent coming in his first year in office.

Championing important pieces of legislation in the House, Rep. Ratcliffe continues to stand by conservative principles. For example, his Separation of Powers Restoration Act (SOPRA) would fully rectify a long-standing ill in the way that federal government policy works, known as Chevron deference. Under Chevron, courts must defer to regulatory agencies on interpretations of current law, flying in the face of separation of powers so critical to American governance.

As Rep. Ratcliffe said of his bill, “By usurping the constitutional powers granted to the Judicial Branch, unelected bureaucrats have effectively formulated their own ‘Fourth Branch’ of government, implementing countless rules and regulations – that hold the force of law – without accountability to the American people.” SOPRA would flip this, instead specifying that courts must make decisions on regulations based on merit, not on deference, restoring Congress’ Article I authority over lawmaking instead of allowing regulators to effectively rewrite laws unchallenged.

Furthermore, Rep. Ratcliffe has introduced his own balanced budget amendment to address our fiscal crisis, which he backs up with consistent votes against spending measures that continue to bankrupt our country. He also understands the need to eliminate unconstitutional functions of the federal government, including the Consumer Financial Protection Bureau, which was created by the Dodd-Frank Wall Street Reform and Consumer Protection Act in the aftermath of the 2008 financial crisis.

Most recently, Rep. Ratcliffe made waves in his slam-dunk questioning of witnesses in the ongoing impeachment hearings held in both the House Permanent Select Committee on Intelligence (HPSCI) and the House Judiciary Committee (HJC).

As partisan politics continues in Washington, it is heartening to know that those who support liberty have an ally in Rep. Ratcliffe. He has proven over his time in office both locally and nationally that he is a valuable leader and representative of those who elected him. FreedomWorks is proud to name Rep. John Ratcliffe (R-Texas) as our member of the month for December 2019 and thank him for his hard work on behalf of all Americans.