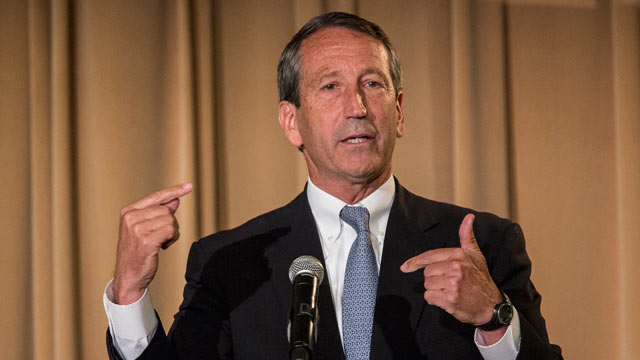 Sanford was born in Fort Lauderdale, Florida, where he grew up. As a child, his family often slept in the same room to conserve electricity for themselves. In high school, he moved to Beaufort, South Carolina. In South Carolina, Sanford became an Eagle Scout, went to college at Furman University, and founded his own real estate company, one he still owns to this day.

During his first term in Congress, Rep. Sanford established himself as one of the most fiscally conservative members of the lower chamber. He would often vote against pork barrel spending, even if it was targeted towards his own district. Rep. Sanford would also be the lone dissenter on bills that had otherwise unanimous support. He also imposed a term limit on his time in Congress, and declined to run for re-election after three terms in office.

A few years later, Sanford became the governor of South Carolina. In that position, he continued to exhibit the principled fiscal conservatism that he’s shown during his time in the House. He vetoed 106 budgets during his time as governor for their excessive spending levels. In the Cato Institute’s 2010 Fiscal Policy Report Card, Sanford was ranked as the most fiscally responsible governor in the entire country. Sanford was the first governor in the nation to reject the money earmarked for South Carolina under the 2009 stimulus package. Unfortunately, he was overridden by members of the state legislature.

During Rep. Sanford’s latest stint in Congress, he picked up where he left off as one of the most conservative members of the House. During his last six years, he has received five FreedomFighter Awards, which are awarded to members who consistently vote to uphold economic freedom and individual liberty. This includes a perfect score for the year 2016.

Rep. Sanford is the original sponsor of the One Percent Spending Reduction Act, H.R. 5572. This was FreedomWorks’ Bill of the Month for August 2018 and would result in a balanced budget in five years. This bill is just one of the many testaments to the fact that Rep. Sanford is just one of a select few members of Congress who actually care about reducing our debt and our deficit, and who are willing to back up their talk with action.

Rep. Sanford will, unfortunately, not be returning to Congress next year. We hope the example he set as both a legislator and a governor will inspire future lawmakers. No matter the issue of the day, Rep. Sanford sought at each end every turn to protect liberty and the Constitution before trying to make friends with other lawmakers in both parties who would criticize him for foiling their crony, big government plans. We thank him for his years of service, wish him the very best in whatever is next, and are proud to name him as November’s Member of the Month.

For you here we are having one of the best portal http://addprinterwindows10.com/ where you will be able to seize information regarding adding printer windows 10 and more about it.

Points you raised very valid points in your post. It really happened some person do not have the right idea. But with your awesome tips, one can easily identify it. You should check Geek Squad Support for any help related to home appliance and electronics at https://geeksquads.xyz/

Rep. Sanford will, unfortunately, not be returning to Congress next year.
showbox https://showboxofficial.com/

On behalf of FreedomWorks’ activist community, I urge you to contact your representative and strongly encourage him or her to cosponsor the One Percent Spending Reduction Act, H.R. 5572, introduced by Rep. Mark Sanford (R-S.C.). The bill, also known as the “penny plan,” would balance the federal budget in five years by simply cutting one penny from every dollar the federal government spends.