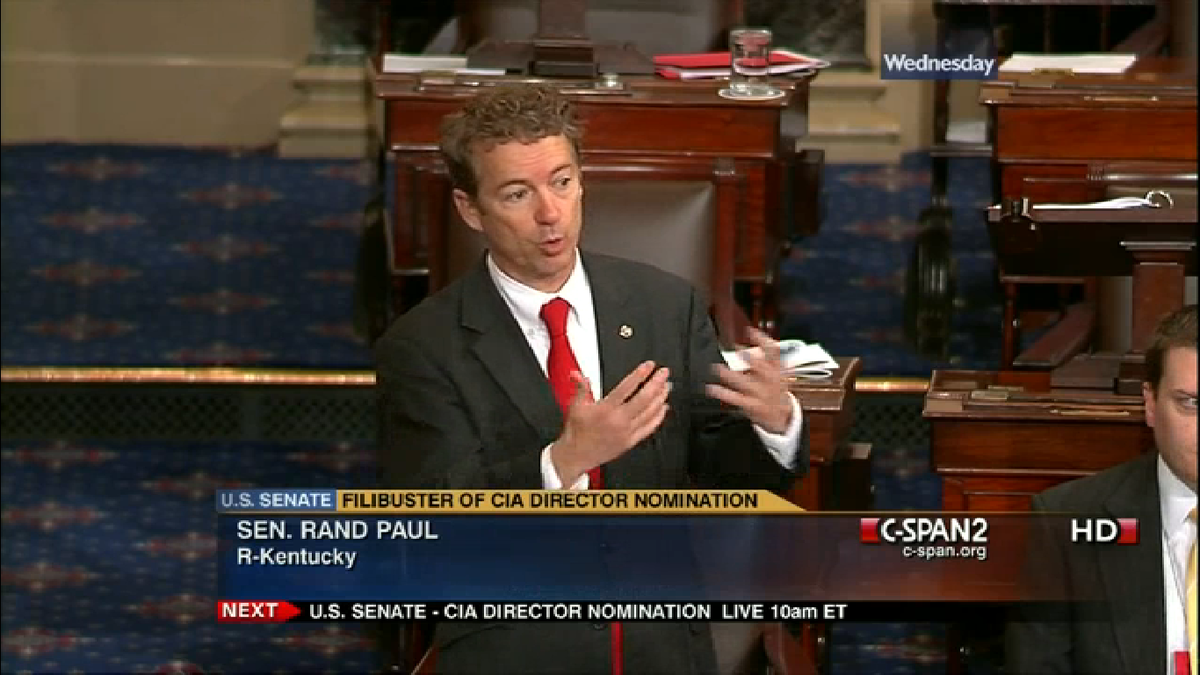 As if knowing what a force he would be if elected, the Republican establishment spent big during the 2010 primary on then-Senate-Minority-Leader Mitch McConnell’s choice for the seat, Trey Grayson. It took a true grassroots insurgency to sweep Rand Paul into office, one of the key victories of the Tea Party wave FreedomWorks helped lead that year. Like his father, former Rep. Ron Paul (R-Texas), Senator Paul has made a name for himself by holding firmly to principle, regardless of whether doing so makes him popular or not.

Senator Paul may have initially become best known for his leadership on constitutional issues where Republican leadership was lacking, such as civil liberties and criminal justice reform. His epic, 13-hour filibuster speech over the Obama Administration’s refusal to state that a U.S. citizen was entitled to due process with respect to the use of drone strikes on U.S. soil, for example, gave rise to the popular cry “Stand with Rand!” Along with his fellow Class of 2010 Senator Mike Lee of Utah, Rand was among the earliest Republicans to call for surveillance reform after Edward Snowden revealed the NSA’s abuse of its Foreign Intelligence Surveillance Act (FISA) authorities.

Rand has also taken strong stands on reforms to federal laws on criminal sentencing and policing. Among the many excellent bills he has sponsored are legislation to curtail abuse of civil asset forfeiture (S. 4074), to curtail the transfer of certain military equipment to police departments (S. 3931), to end no-knock police raids (S. 3955), to allow federal judges discretion in enforcing mandatory minimum sentences (S. 399), and to prohibit the indefinite detention of U.S. citizens without trial (S. 1859).

Meanwhile, Senator Paul has been just as much a champion of limited government in fiscal and economic policy as well. Since 2011, he has been the lead sponsor of the REgulations In Need of Scrutiny (REINS) Act, currently S. 92, one of the most important regulatory reform bills that Congress could pass.

A medical doctor himself, Senator Paul has continuously pushed to expand Americans’ freedom to choose better options for providing affordable health care, including sponsoring one of the best free-market proposals out there, the ObamaCare Replacement Act of 2017 (S. 222). Working closely with the Trump Administration, Senator Paul saw one of his key reforms -- association health plans -- enacted via regulation, allowing hundreds of thousands of Americans new options to access affordable health coverage across state lines. Paul has continued his push for freedom of choice with his recent Health Savings Accounts for All Act (S. 4367).

It should be no surprise that Senator Paul has taken up his father’s banner on drawing attention to the importance of sound monetary policy, another issue of prime importance to FreedomWorks. He succeeded in securing the first-ever recorded Senate vote on auditing the federal reserve in 2016.

Senator Paul has continuously sounded the alarm on the threat posed by rising government spending and debt. In 2011, when the newly-GOP-controlled House was debating a budget plan that wouldn’t even achieve balance in 10 years, Paul made an example of their timidity by introducing a budget plan that would have balanced in five years without either raising taxes or taking money from Social Security or Medicare.

He has continued to constantly vote, often opposing his own party, against government spending, as well as constantly forcing the Senate to vote on measures that would establish the fiscal restraint Republicans claim to support. For example, in 2019, Rand secured a vote on his Pennies Plan Balanced Budget Act, S. 1332, and has continuously attempted to get his colleagues to offset at least some of the trillions in new spending to address the coronavirus pandemic.

Most recently, Senator Paul has tackled the critical issue of reforming public education by introducing the SCHOOL Act, S. 4432, which would vastly increase parents' choice in their childrens' education by allowing federal education dollars to follow the child towards a school of their choosing.

Sadly, this impressive track record has made Senator Paul a frequent target for partisan vitriol from all sides of the political spectrum, most recently being rescued from an angry mob of Marxists by the D.C. police. Rand’s willingness to stand up for liberty in the face of powerful opposition has defined his tenure in the Senate, and we’re proud to name him our member of the month for September 2020.