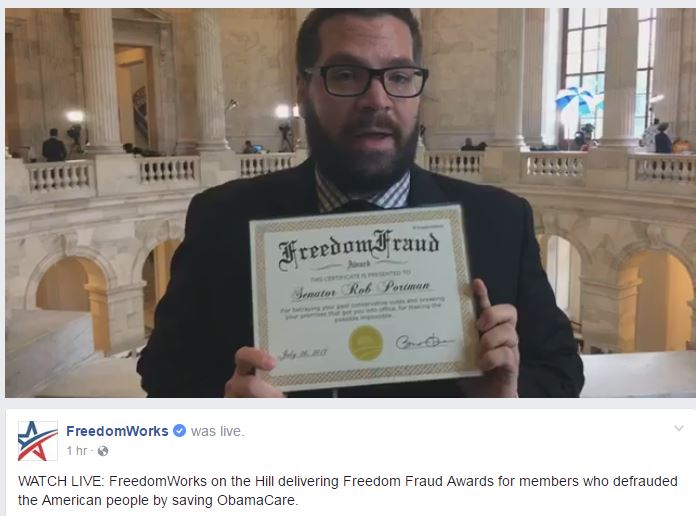 The FreedomFraud Awards recognize the height of political fraud by senators who voted to defend ObamaCare by voting against a bill virtually the same as one they supported less than two years ago. While protected by Barack Obama’s veto, they supported ObamaCare and railed against it. Now that President Trump supports the bill, they have exposed themselves as political liars.

FreedomWorks Vice President of Legislative Affairs Jason Pye delivered the awards to senators’ offices Friday afternoon. You can see an archived live stream here. Eligibility for the award is based purely on whether senators campaigned on repeal and voted for this bill less than two years ago and opposed it when it could have passed.

“These people committed the greatest political fraud in American history,” said Jason Pye. “Republican politics has focused on repealing ObamaCare for the better part of a decade. There were frequent votes to repeal ObamaCare. These senators showed great contempt for their constituents by going against everything they’ve stood for on ObamaCare repeal.”

After the 2015 bill passed, Sen. Rob Portman (R-Ohio) said, “I'm for repealing this broken law and replacing it with something better that gives patients more choice, decreases costs and increases access to quality, affordable care.”

After the 2015 bill passed, Sen. Lisa Murkowski (R-Ala.) said, “This law is not affordable for anyone in Alaska. That is why I will support the bill that repeals the ACA and wipes out its harmful impacts. I can’t watch premiums for Alaskans shoot up by 30 percent or more each year, see businesses artificially constrained, or see the quality of public education decline.”

After the 2015 bill passed, Sen. Shelley Moore Capito (R-W.Va.) said, “I am glad that a repeal bill will finally reach the president’s desk.”

Sen. John McCain (R-Ariz.) said, “It is clear that any serious attempt to improve our health care system must begin with a full repeal and replacement of Obamacare, and I will continue fighting on behalf of the people of Arizona to achieve it.”

, “The wisest course is to repeal Obamacare and replace it step by step with solutions that lower health care costs.”