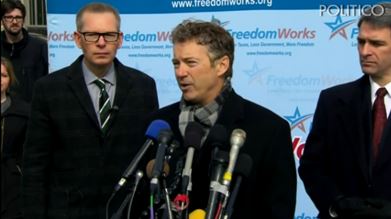 Washington, DC- The class action lawsuit against the NSA moves forward with another key development towards ending the government’s warrantless NSA spying program on American citizens. In the afternoon of Monday May 19, FreedomWorks and Rand Paul filed their formal opposition to the Obama Administration’s efforts to dismiss the suit.

Earlier in the month, the Obama Administration filed its motion to dismiss the lawsuit on a Friday evening, in hopes it would go unnoticed over the weekend. The motion to dismiss was rooted in the argument that the NSA spying program should not be considered an “injury,” and should therefore be dismissed.

“It’s outrageous that the government would deny that the warrantless collection of citizens’ private phone data is an ‘injury’ to the American people. Sweeping surveillance without warrants doesn’t just injure the civil liberties of Americans, it puts them in the constitutional ICU,” commented FreedomWorks President Matt Kibbe.

“The Bill of Rights exists to put a check on impulsive government violations against the rights of individual citizens. We, representing the millions of victims of the largest Fourth Amendment violation in history, have the right to be heard in court.”

The government’s motion to dismiss was preceded by another effort to derail the suit, called a motion for a “stay,” which means the lawsuit would be frozen indefinitely, but not technically dismissed. Opposition to this effort has been officially filed as well.

Kibbe continued, “The Obama Administration is using procedural trickery to sidestep the judicial process and silence the objections of millions of Americans. They are sending a message through action that the powers of the executive branch should be limitless. Constitutional checks and balances are there for a reason, and we will not back down until the American people have our day in court.”

The defendants will have until May 29 to reply to the opposition. FreedomWorks is calling on citizens who believe in the Bill of Rights to support the lawsuit by signing a petition, at www.ConstitutionDefenseFund.com.

Keep up the good fight! It is well worth the effort. Don't be weary in well doing. GO TEAM GO!