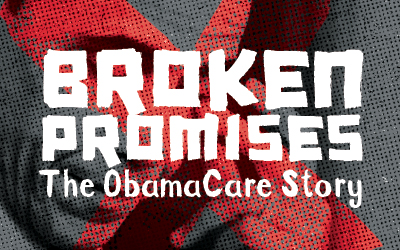 As the enrollment deadline approaches, FreedomWorks educates Americans on the broken state of the Affordable Care Act while the Democrats promote GIFs and “Brosurance”

**Washington, DC- ** As the ObamaCare enrollment deadline approaches, FreedomWorks released the ObamaCare Autopsy, an educational booklet on the harsh realities of the President’s signature health care law. Titled “Broken Promises,” the booklet holds Democrats accountable for promises made in their own words in the years leading up to the passage, enrollment, and implementation of the law.

FreedomWorks Policy Analyst Patrick Hedger explained, “Democrats have made a lot of promises to the American people, but today the results are in. The sad reality is that this government takeover has resulted in billions of dollars added to the deficit, premiums raised by 41 percent on average, millions of individual plans dropped, jobs lost, and work hours cut.”

Hedger continued, "Democrats rammed this law through Congress, then hid from its realities behind a 2014 implementation date. Now that the law has proved to be disastrous, they’re hiding again behind internet memes and insulting overtures to young Americans like 'Brosurance' and pajama boy. FreedomWorks plans to fight through the noise by arming activists with the facts, rather than talking down to people.”

Among the broken promises debunked in the booklet are:

A PDF copy of the Broken Promises book is available online: http://www.freedomworks.org/broken-promises.

FreedomWorks is a grassroots service center to a community of over 6 million activists who believe in individual liberty and constitutionally-limited government. For more information, please visit www.FreedomWorks.org or contact Jackie Bodnar at JBodnar@FreedomWorks.org