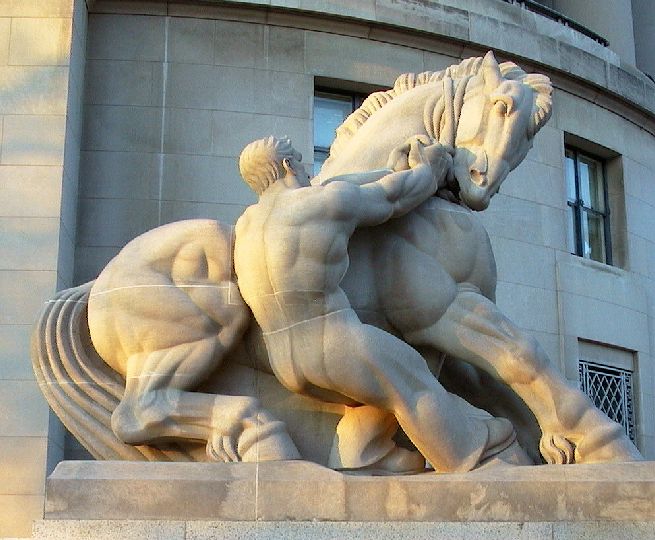 The statue outside the FTC symbolizes government restraint of free trade.

The argument goes like this: the proponents of Net Neutrality regulations argue that the Federal Communications Commission (FCC) needs to expand its authority over internet service providers (ISPs) to prevent anticompetitive behavior, such as blocking or slowing certain types of content for the purpose of squeezing revenue out of content providers. Most proposals to accomplish this, including the one backed by the president, would reclassify ISPs as “common carriers” under Title II of the Telecommunications Act, a decades old law crafted long before the implications of the internet had become clear.

Title II regulation would essentially treat ISPs like other utilities, such as electricity, gas, and water, and grant the FCC a broad set of powers to dictate what these companies can and cannot do. Among these powers, is the ability to demand free service for the government (if justified under “national defense” grounds), and a condition of the regulation is a requirement to pay into a Universal Service Fund, which will increase costs for providers and consumers alike.

But even if you concede that the threat of anticompetitive behavior is real, the letter to the FTC points out, there is absolutely no need for such drastic regulatory action. There already exist multiple regulatory mechanisms for punishing companies that act in ways the government deems harmful to competition.

The Federal Trade Commission has the power to “stop and prevent business practices that are likely to reduce competition and lead to higher prices, reduced quality or levels of service, and less innovation.” This should be perfectly sufficient to protect the internet from the problems Net Neutrality supporters claim to fear.

And, if that is not enough, the U.S. Department of Justice is charged with enforcing antitrust laws and principles, which allegedly “protect economic freedom and opportunity by promoting free and fair competition in the marketplace.“

None of this is to argue that either of these agencies should take a more active role in regulating the internet. The government’s definition of an anticompetitive practice is often shortsighted, and antitrust action frequently leads to the stifling of innovation and misguided interference with market forces. The Justice Department’s suit against Microsoft for the heinous sin of attempting to give a free product away to its customers comes to mind, and the FTC literally has a statue symbolizing its role in restraining free trade outside its Washington office. But the point is that the regulatory authority to prevent content blocking and throttling by ISPs already exists, without any need for new regulations with far reaching, hard to foresee consequences.

It remains to be seen whether the FTC will take actual action in influencing the debate, or follow the specific recommendation offered by the coalition: "As it did in 2007, the FTC should caution the FCC by warning the agency of the adverse effects of adopting per se restrictions on potentially pro-competitive conduct." Nevertheless, discretionary regulation that can be applied only when there is a perceived violation is a far better alternative to a set of sweeping per se rules that punish those who have done no wrong, and it would be refreshing to see the FCC put in its place.

An unregulated internet is best, but in this instance the FTC’s existing authority is a better approach than what the FCC is attempting.