The Fundamentals of Free Enterprise 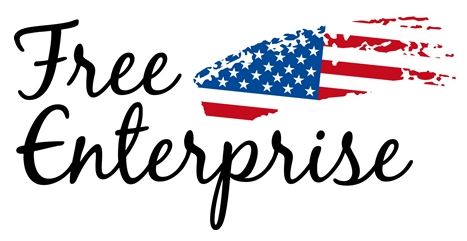 "Ego is the fountainhead of progress." -- Ayn Rand

"Free enterprise" is defined as "an economic system in which private business operates in competition and largely free of state control." Known to many as simply capitalism, the term capitalism has been beaten down by conservatives, who blamed capitalist for allowing the banks to go out of control in 2008. Capitalism was (and still is) the target of the New Left, as it is blamed for most of the country's inequality issues.

Why call this system of economics "free enterprise" over "capitalism"? Both are the same thing, except "free enterprise" hits the target conservatives are looking for, since the phrase promotes innovation and individualism; while "capitalism" is tied to growth in capital, which doesn't always necessarily mean progress, since capitalism can lead to "crony capitalism," where businessmen are in bed with the government. In order to defend free enterprise, it is important to understand the fundamentals of what it is.

Everyone works for something right? In today's America, business owners and job creators are the scapegoat for almost every issue imaginable, just ask a Bernie Sanders or Hillary Clinton supporter. No matter what, these “greedy” capitalist take the blame every time. Each time there is a market related issue, the state comes out with the sound and fury crying "more controls, more regulations, more taxes!"

According to Yaron Brook, "when the financial crisis hit in 2008, for instance, Republican leaders raced to blame 'greedy' bankers, not government policy. President Obama has intensified this outlook." Instead of constantly attacking the makers and movers in our society, we need to consider what life is like without them. Brooks brings up that:

Businessmen are the ones who create the medicines, food preservatives, sanitation systems, irrigation systems, and millions of other innovations and labor-saving devices that have nearly tripled our lifespans and provided us with a standard of living unimaginable by our forefathers... the businessman is the great liberator who, in the short span of a century and a half, has released men from bondage to their physical needs, has released them from the terrible drudgery of an eighteen-hour workday of manual labor for their barest subsistence, has released them from famines, from pestilences, from the stagnant hopelessness and terror in which most of mankind had lived in all the pre-capitalist centuries.

For all men to be equal under the law is paramount to the sustainment of a civil society. For all business owners to be able to compete in free and fair markets, it is vital that no matter how big the size or how wide the influence, every business is protected and held accountable under the law. The issue at hand today is that crony capitalist work with corrupt politicians in order to unfairly line their pockets. What most people fail to understand is that those that work in the public sector are just as susceptible to incentives as those in the private sector, and are no less filled with opportunistic and corrupt government officials.

A separate argument from a Biblical worldview is seen in the classical liberal/ libertarian concept of private property:

The right to private property is the social-political principle that adult human beings may not be prohibited or prevented by anyone from acquiring, holding and trading (with willing parties) valued items not already owned by others. Such a right is, thus, unalienable and, if in fact justified, is supposed to enjoy respect and legal protection in a just human community.

Let's look at a small example- within forty years of its creation, NASA has continued to use the same series space shuttle, despite advancement in technology, it has remained the same. Sadly, American romanticism of space travel has been outsourced to the Russians, who launch missions to space for us now using mediocre space travel methods. Now look at private sector space travel; businessmen and women, the fountainhead of innovation, have created sleeker, smarter, safer, and more efficient technology advancing the aerospace industry drastically. When the state is involved in industry, innovation is stagnant since the profit-making incentive is removed from the equation. Simply put, markets create while the state stays still. In order to advance society, we must allow free individuals to create, compete, and cooperate freely of the government in the economy.