Go to http://www.garyjohnson2012.com/ or http://yowie.com/videochat/58r to ask him any question that you wish. No topic will be off limits!

We hope that more candidates will follow in his lead to host online town halls to answer questions directly from voters.

Here are a few sample questions that I would like to ask Gary Johnson:

1. What federal departments would you seek to eliminate if elected?

2. What do you believe is the proper role of government in society?

3. You have previously called for a Fair Tax. Why do you believe that is the best tax reform plan?

4. Do you support allowing young people to opt out of Social Security?

6. There are quite a few former or current governors running for president. Do you have a better record of cutting government spending than Romney, Perry and Huntsman? 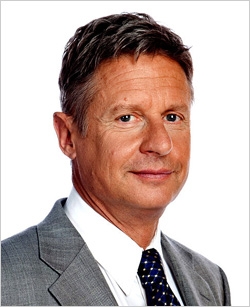 I will be voting for Governor Gary Johnson for president! End the wars, balance the budget, equal rights for LGBT and legalize marijuana! This guy is exactly who America needs in The White House! The People's President.

Related Posts
It's Not Gridlock That is Blocking a Carbon Tax, It's Science and Economics
"https:\/\/www.freedomworks.org\/content\/its-not-gridlock-blocking-carbon-tax-its-science-and-economics?social=facebook_share"
null
https://fw-d7-freedomworks-org.s3.amazonaws.com/styles/thumbnail/s3/te_social_media_share/fw_default_0.jpg?itok=35IWEBMb
Blog

On the FreedomCast today, Editor of RedState.com and Fox News contributor Erick Erickson joins me to discuss the conservative/libertarian divide, the importance of finding candidates that will fight their own side and the importance of winning over Ron Paul millennials and expanding the GOP tent.

2
03/21/2013
Republicans Want to Give Obama More Power? Why Do We Lose Elections?
"https:\/\/www.freedomworks.org\/content\/republicans-want-give-obama-more-power-why-do-we-lose-elections?social=facebook_share"
null
https://fw-d7-freedomworks-org.s3.amazonaws.com/styles/thumbnail/s3/te_social_media_share/fw_default_0.jpg?itok=35IWEBMb
Blog

Republicans Want to Give Obama More Power? Why Do We Lose Elections?

In the constant stream of pixels, ions, electrons and hot air that passes by at a constant and overwhelming rate that is akin to the speed of light, two articles caught my attention on Wednesday. The latest waste of attention is on the looming sequester cuts that are set to hit on Friday, that would have the 'devastating' effect of cutting $85 Billion in budget increases from a non-budget that is already over a trillion in the hole.

Don't Call Me a True Conservative

The issue is not who is conservative, but who is willing to gamble his own power to achieve a result beneficial to everyone.  In the power struggle between the DC Establishment and grassroots, labeling of the two sides often conceals the battle lines.  Language frames the debate, and I am still not completely comfortable with the labels "establishment" and "grassroots".  I'm even more uncomfortable with the labels "true conservative" and "RINO", as they don't describe at all what the fuss is about.

Colin Powell and His Search For Relevance

Former Secretary of State Colin Powell was featured on “Meet The Press."  Powell, who identifies himself as a Republican, has faced much scrutiny from conservatives for endorsing Obama, not to mention his consistent attention seeking tactics at the expense of the GOP.

Since November's debacle, hundreds of conservative pundits and activists have wrung their hands over the GOP’s messaging problem. Luckily for Republicans my background is in branding, marketing and communications, so let's fix this.In today's mainstream media, conservatives can't catch a break. Epic Democratic catastrophes are ignored while minor Republican faux pas are branded as threats to the republic. Among the chattering classes liberalism has all the power; that won’t be reversed overnight. So conservatives must use liberals' power against them.

South Carolina Gov. Nikki Haley appointed Rep. Tim Scott to be the replacement for outgoing Sen. Jim DeMint. The move was highly anticipated since DeMint announced that he would be departing the Senate on December 6th. Scott, a Tea Party favorite, will bring a strong message of conservative principles to the Senate; one that is centered around limited government, lower taxes, and free enterprise.