Get ready for another showdown on NSA spying 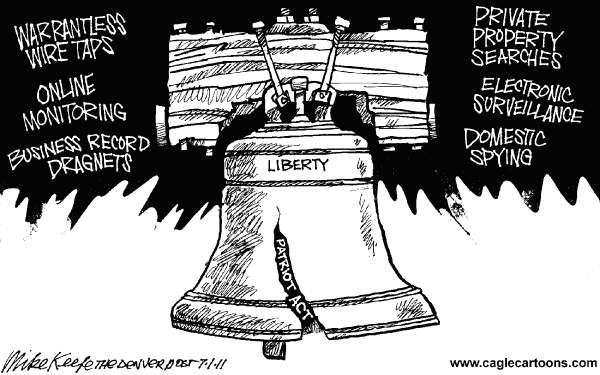 The National Security Agency's vast spying apparatus has been a tremendous hurdle for the United States' still-burgeoning tech industry. Many lawmakers on Capitol Hill are, however, unconcerned with the economic impact of these surveillance programs, making it difficult for meaningful reforms to work their way through Congress.

Though reform efforts have been focused on the NSA's bulk phone metadata collection program, the concerns of the tech industry don't end there. The intelligence community treats the cloud -- where people store personal, often sensitive data -- as a treasure trove of information just waiting to be mined in the name of "national security." These pernicious practices, made possible by the USA PATRIOT Act, Amit Patel explains, hurt the tech industry's international standing, as countries pass anti-NSA legislation, and harms the economy.

"Prospects are shying away from American companies, but the country still rules the cloud for now. That won’t always be the case. When you consider that data is an asset, and the more data a company hosts, the more money it makes, there are tens of billions of dollars in losses looming over providers in the States," Patel, chief financial officer of HighQ, wrote at TechCrunch. "IDC predicts that 'the digital universe will double every two years' until 2020. Cloud-based Internet service, apps and enterprise IT productivity are the 'key applications' fomenting this economic impact."

"What if only a fraction of those services existed in the United States in 10 years? What if U.S. companies continue to be prevented by legislation from capturing and innovating on rapidly growing data? To say that the country’s innovation- and information-driven economy will be dented is putting it mildly," he adds.

Unfortunately, concerns such as these have been dismissed by lawmakers. House Intelligence Committee Chairman Mike Rogers (R-MI), who did not seek reelection, chastised tech firms critical of the NSA's practices, which, they say, will hurt their business, particularly in Europe. "I don't know about the rest of you but that offends me [to] form the words 'European business,'" Rogers, one of the intelligence's community's most outspoken advocates, said in June at a CIA-hosted conference. "Everyone on those boards should be embarrassed and their CEOs should be embarrassed and their stockholders should be embarrassed."

While NSA apologists, like Rogers, struggle to point to an instance in which information obtained through these programs prevented a terrorist attack, the negative economic impact of the intelligence agency's spying programs is very real. An analysis released by the R Street Institute early last year estimated that tech firms stand to lose "between $35 billion and $180 billion over the next three years."

Though reform efforts have, to this point, fallen short, Section 215 of the USA PATRIOT Act, one of its most controversial provisions, will expire on June 1, setting up what could be a contentious reauthorization debate in both chambers of Congress, and the tech industry will be major players in it.

Reauthorization of Section 215, through which the NSA claims the authority to obtain phone metadata from providers, may have been a relatively uneventful event in the past, that could change this time around. Rep. Jim Sensenbrenner (R-WI), the principal sponsor of the USA PATRIOT Act turned critic of NSA's spying programs, warned the Obama administration during a July 2013 House Judiciary Committee hearing that "[t]here are not the votes in the House of Representatives to renew Section 215."

"It’s got to be changed, and you have to change how you operate Section 215," Sensenbrenner told Deputy Attorney General James Cole. "Otherwise...you’re not gonna have it anymore.”

There is an appetite for reform, not only from the American people and the tech industry, but also inside Congress. In June, the House passed, by an overwhelming margin, an amendment sponsored by Rep. Thomas Massie (R-KY) that would have placed much-needed limitations on the NSA.

The Massie amendment may have been stripped from the CROmnibus in backroom negotiations, but the push for reform isn't over, not even close, and the Section 215 reauthorization debate could spur meaningful action to address the worries one of the United States' most valuable industries growing industries and protect Americans' rights under the Fourth Amendment.