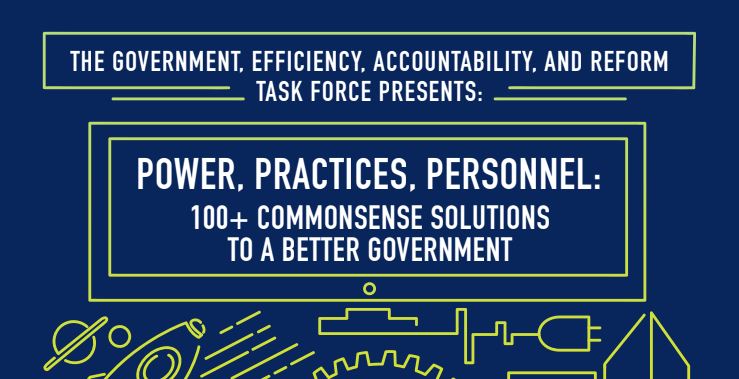 The recommendations that the Republican Study Committee’s (RSC) GEAR Task Force have put together are laudable. Chaired by Rep. Greg Gianforte (R-Mont.), the task force has worked for years to put together a total of 113 proposed nonpartisan reforms that employ conservative concepts and ideas to fix a problem that both parties have created. Were many of these to be implemented, they would be huge strides toward fundamentally shifting the balance of power in our nation’s capital back to where it belongs -- as close as possible to the people of our nation.

Through three steps of reforming government power structures, practices, and personnel, the RSC GEAR report offers a playbook toward restoring the original intent of the three branches of federal government. Currently, we have a legislative branch that has relinquished much of its constitutional power, an executive branch that has turned into a runaway administrative state, and a judicial branch that has been pushed toward activism from the bench instead of impartial legal decision-making. The RSC GEAR report outlines how to right these wrongs.

In many ways, the RSC GEAR report embodies and makes commonsense recommendations for putting FreedomWorks’ own paper on Article One, Restoring the Balance of Powers: The Constitutional Role of the Legislative Branch, into practice. Published last week, our paper outlines how and why the legislative branch has ceded authority to the executive branch and what Congress needs to do to take that authority back, in accordance with the Constitution.

On everything from regulations and trade to war powers and budgeting, Congress has let the executive branch trample over its rightful powers. The executive branch makes policy that flies in the face of laws on the books and and more importantly of the Constitution, with few to no checks from the legislature or the judiciary. One of the first thing students learn in civics class is the importance of checks and balances, but unfortunately these have been eroded over time.

Thankfully, overlap between our paper and the RSC GEAR report is substantial, which represents a growing consensus that because of these improper power balances, members are becoming uncomfortable with the resulting government inefficiencies that plague Washington and harm Americans every day. For Congress, righting this power balance must include, as both pieces suggest, enacting legislation such as the REINS Act, the Regulatory Accountability Act, and the ARTICLE ONE Act, all of which are aimed at bringing policymaking back from the executive branch into the proper purview of the legislative branch.

Chief among these is ending Chevron deference. As the RSC GEAR report notes, Chevron deference “has been devastating in enabling agencies to essentially be their own judge and jury in reviewing their rulemaking. FreedomWorks described the problem of Chevron as an ‘...alarming erosion of the constitutional separation of powers, allowing federal agencies to determine vaguely written statutes -- perhaps, at times, purposefully written to be vague -- without judicial review.’” It is encouraging to see a broad consensus on ending this doctrine.

The RSC GEAR report also endorses a number of policy proposals that FreedomWorks has separately endorsed outside of Restoring the Balance of Powers, including subjecting regulatory dark matter to congressional review, ending sue and settle, enacting regulatory budgeting, reforming civil service hiring, and providing accountability to agency programs, among others.

There should be no American, let alone member of Congress, who disagrees with making government more efficient, effective, and accountable. Good governance should not be partisan and it is our hope that among these 113 policy recommendations, members across the ideological spectrum can find at least a few -- but hopefully many -- to agree on enacting.

We are proud to stand with the RSC in pointing out this simple fact: It is the job of government to work for the people it represents. It is up to all of us to play our part to make this a reality.