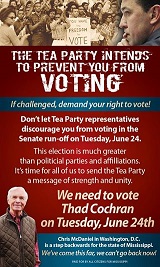 The Daily Caller reported robocalls are trying to mobilize black Democrats to support Cochran by tying McDaniel to the Tea Party and its opposition to President Obama.

In the automated message appearing to target black Democrat voters in Mississippi, the female voice on the line claims that tea party challenger Chris McDaniel would lead to more obstruction in Washington and create more “disrespectful treatment” to the nation’s first African-American president.

“The time has come to take a stand and say NO to the tea party,” the message says. “NO to their obstruction. NO to their disrespectful treatment of the first African-American president.”

The left-wing media is jumping at the opportunity to slam the Tea Party and support Cochran by raising fears of intimidating black voters.

Several right-wing groups have banded together to form a “voter integrity project’ in response to the news that Republican Senator Thad Cochran is courting black Democratic voters in his runoff with the Tea partier Chris McDaniel.

The Senate Conservatives Fund, Freedom Works and the Tea Party Patriots, all political action committees, will “deploy observers in areas where Mr. Cochran is recruiting Democrats,” according to a Times article. Ken Cuccinelli, the president of the Senate Conservative Funds, said these observers would be trained to see “whether the law is being followed.

Does anyone think this “project” will actually encourage voter “integrity” as opposed to voter suppression? Misinformation is already circulating as to the details of the law that voters must follow.

The GOP establishment’s race card effort is reinforcing the negative image of the Tea Party and will do lasting damage to the reputation of Republicans within the black community.

It’s absolutely disgusting that the GOP establishment would stoop as low as left-wing radicals to maintain power.

They actually came out from behind the curtain and exposed themselves as the true RINOcrats that they are.

The GOP establishment should be proud of itself.

Hinds County is 69% black according to Wikipedia.

Cochran won the runoff by his approximate vote improvement in Hinds County.

This is disgusting!
Those in the GOP who oppose TEA Party activists are a little more humble when it's election time for themselves.
It is ridiculous for this internal fued to get so ugly.
Those who carry it beyond convention halls are doing an injustice to the cause.
Primaries are for decisions, not divisions.
Good job Deneen!

And it's no small wonder that Sen. Thad Cochran is so 'scared' that he asked for Democrats to vote in Mississippi Republican Primary! No wonder the Liberal GOP is marching in lock step ... right behind him!

While many members of the mainstream media have been negligent in covering what has become a nationwide, grassroots movement, activists across the country have taken it upon themselves to make sure the word is getting out.

Help Us Fight Taxes and Spending in Florida

I just wanted to take a minute and update you on our efforts to fight taxes and spending in Florida. Many of you will be excited to learn that we are planning Taxpayer Tea Parties in multiple cities across Florida! This is because of the overwhelming interest in joining our effort to fight wasteful government spending and the massive bailouts. You can rsvp for these events by visiting IamWithRick.com and signing up to attend the tea party closest to you. As CNBC's Rick Santelli pointed out, it's time for the American people to defend free markets and take to the streets in protest!SIGN UP NOW for the protest closest to you! We will send you updates on the events as we get them.Also, if you care about wasteful spending and higher taxes, you might want to take a minute to send the politicians in Tallahassee a message. Some legislators are proposing an increase in the cigarette tax, saying that they need more money to spend. This is ridiculous! The state government should not be spending more, but less.And it certainly should not be raising taxes on anyone during a recession. Sure, the nanny-staters want to control people's lives and punish smokers, but do they know that smokers tend to be poorer than non-smokers? Plus, increasing taxes on cigarettes will harm small businessses that sell them, which will only lead to more economic suffering.Please TAKE ACTION and tell the politicians in Tallahassee that enough is enough! It's time that they make real spending cuts and reduce the size of the state government.Thank you for your dedication to lower taxes, less government and more freedom. We will be sure to keep you updated on ways to help us defend liberty in Florida.

I just wanted to take a minute and update you on our efforts to fight taxes and spending in Oregon. Many of you will be excited to learn that we are planning Taxpayer Tea Parties in multiple cities across Oregon! This is because of the overwhelming interest in joining our effort to fight wasteful government spending and the massive bailouts.You can rsvp for these events by visiting IamWithRick.com and signing up to attend the tea party closest to you.As CNBC's Rick Santelli pointed out, it's time for the American peopleto defend free markets and take to the streets in protest!SIGN UP NOW for the protest closest to you! We will send you updateson the events as we get them.Also, if you care about wasteful spending and higher taxes, you mightwant to take a minute to send Governor Kulangoski a message. As you know, we’ve been closely following one bad idea after another that has come out of Salem.  First it was a massive cigarette tax hike.  Then it was plans for a tax on mileage, higher registration and title fees, a gasoline tax hike, and even an outrageous 1900% beer tax hike!  So far, it’s been all taxes and no cuts that go after waste and the regulations that burden businesses in Oregon.  Now, rather than trying to lift the financial burdens of hurting Oregonians, legislators are floating more plans to rake in more cash.  These include raising the state income tax, an even bigger gasoline tax hike, and taking away Oregon’s kicker!  States across the board are facing budget problems, but taking more money out of the pockets of people who are already struggling to make ends meet isn’t the answer.  Take Action and tell your elected officials that you oppose more tax and spend plans.  Like everyone else, Oregon’s leaders need to reexamine the books and stretch our dollars a little further.