Yesterday, House Republicans released to the public their repeal bill for The Patient Protection and Affordable Care Act (PPACA) also known as the ObamaCare law.  While it took Democrats nearly 3,000 pages worth of complex legalese to institute their radical change to the American health care system, it will take the GOP a mere two pages to repeal the unwanted law (and its only taking that much paper because of formatting).

Here, see for yourself: 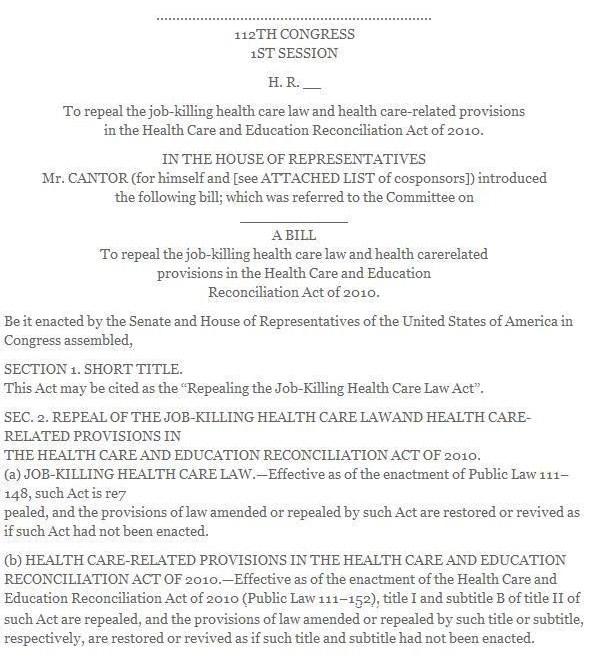 What does this repeal bill aim to do?  As the first line of the legislation indicates, the goal of the bill is to repeal the Democrats' government takeover of health care and the health care related provisions included in the Health Care and Education Reconciliation Act of 2010 (HCERA).  If passed, the repeal would reset American health care laws to the time prior to the signing of ObamaCare in March of last year.  In addition to that, it would eliminate the fixes to the original health bill that Democrats included in the companion reconciliation act that passed through Congress at the same time as the ObamaCare law.

This bold bill may be the first indication that the new GOP majority in the House is committed to keeping the promises that they made to the American people.  Unlike President Obama who campaigned on transparency and then allowed lobbyists and lawyers to craft his reform in secret, Republicans seem to be delivering on their 2010 campaign promise to repeal the bureaucratic nightmare instituted by Democrats.  By revealing their intention to strike down the entirety of the health care law, Republicans have opted not to play it safe by picking and choosing which unpopular parts of ObamaCare to repeal and which more popular parts to leave intact.  They campaigned on the notion that they would act in the best interest of the American public and they seem to understand that the only way to follow through on that promise is to eliminate the Democrats' reform and start over from scratch.  As the last line of their bill states, passing the repeal would make it as though ObamaCare “had not been enacted.”

In addition to offering this legislation to repeal the health care law, the GOP has also offered a two page resolution that outlines the reform ideas that they would likely include in an alternative Republican health care law.  The outline lists many of the types of reforms that FreedomWorks has﻿ championed for decades.

(Click here to see a list of reforms that we would like to see Republicans fight to enact with their new majority in the 112th Congress.)

If the GOP repeal is passed through Congress, it is likely that President Obama will use his presidential veto to strike down the bill.  Still, using the next two years to pass transparent, liberty-based legislation in the House will reveal to the American people how the GOP will govern if they gain a true majority in 2012.  Repealing and replacing the freedom-stifling ObamaCare law which grows more unpopular by the day is the first step on the path to fiscal sanity.  As our friend Grover Norquist, President of Americans for Tax Reform (ATR), astutely notes:

Obama’s veto or the Democrat Senate’s filibuster will remind Americans that they only got part of the job done on Nov. 2, 2010.﻿﻿﻿﻿﻿﻿