With unemployment in the United States at 8.3%, job growth is something which should be encouraged. However, it would seem that the government is only interested in jobs that support their agenda. In the field of oil and gas, for example, the government’s misguided policies are preventing the creation of 64,805 new jobs and $15 billion in economic growth. 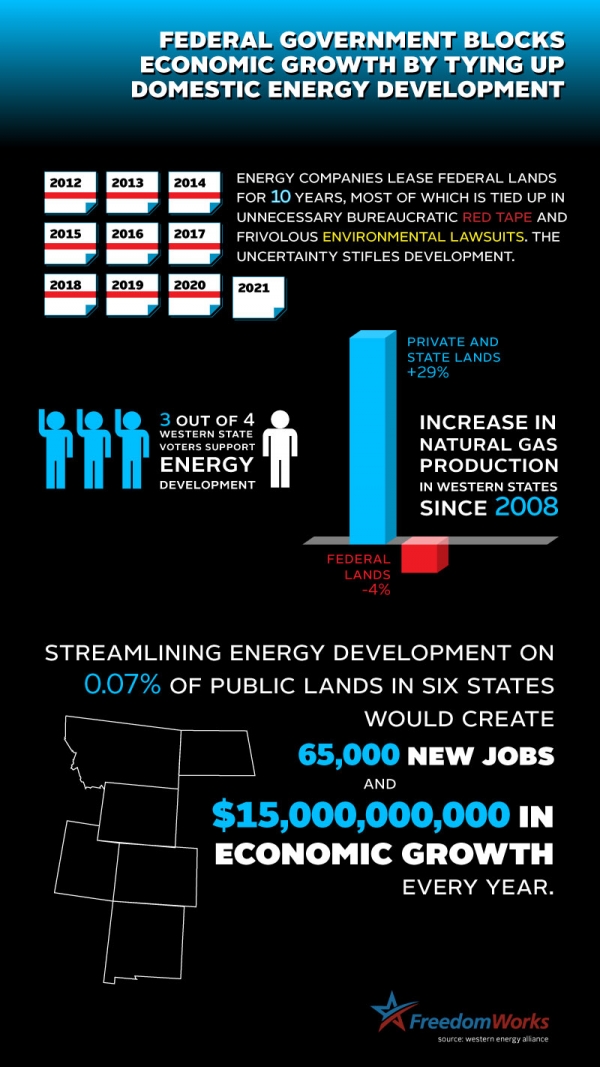 Kathleen Sgamma of The Western Energy Alliance testified earlier this month before the House Energy and Commerce Committee, Subcommittee on Energy and Power. In this testimony, Sgamma discussed how oil and gas producers are affected by restricted access to federal lands. Drilling is up on private and state lands, but down on federal lands because “federal governmental policies make it extremely difficult to operate on public lands.” She then went on to detail specific situations in which development on federal lands was made so difficult that it had an adverse effect on exploration and drilling which, in turn, stalled potential investment, growth, and employment. In closing, Sgamma said “In all these cases, the general public loses out in terms of energy all Americans own and return to the American taxpayer. Small businesses, the engines of our economy, are prevented from creating jobs and economic growth.”

Our government doesn’t seem to understand the widespread issues caused by their actions. Energy problems are adding insult to economic injury as more Americans are hit in the pocketbook. While an oil refinery hasn’t been built in this country since 1976, our government has loaned billions to help build and improve a refinery in Cartagena, Columbia. That money could be better invested in the American economy.

The issue of overregulation is neither new nor unique to the western states. Things like offshore drilling or drilling in ANWR would open up vast reserves, giving our economy a much-needed boost. Jack Gerard of the American Petroleum Institute said that “We need to see more than lip service from Washington about ending this stranglehold on economic growth. And this is what people are paying attention to, and this uncertainty is having a detrimental effect on investment in the economy and investment in American workers.”

We need an all of the above approach to energy in America, rather than none of the above. For our future and our economy, we need to cut through the red tape to create jobs and get the economy growing.

I wish to thank you for your productive comments on my post concerning fossil fuel abuse. I have to admit to you, I have dyslexia, and it can at times take away from the message, especially to those who have nothing constructive, only destructive things to say. You are an ass. How is that for Bob's Sideshow..

All of the above is the only policy that makes any sense. Beautiful graphic, by the way.

Thank you, sir. :) I'm excited to be working on info-graphics for FreedomWorks.

Dean, I can't support "All of the Above" when tax subsidies are involved.

I wish to make a comment about energy abuse in this country by US citizens. And this being the reason why gas and oil prices are so high, and absolutely no one except the dependents on fossil foil change their bad habits and make a change. The jobs and the stats on your site are false and misleading. The only position this country should be taking is how to move off fossil fuels and work on new energy sources like geothermal, and sun, solar. And stop taking for granted someone elses LANDRIGHTS..... This country has to get a crip..

Andrea Hall, I think you're talking about Indians but I'm not sure. Also, Energy abuse?? really?? tell me something. How's that chevy volt working out for you? has it exploded on fire yet?
You don't get to dictate what direction the country takes. we ALL live here. you can shout to the heavens but shaking your finger at others and tsk tsk'ing them will not get them to come to your point of view.
As for those "bad habits" - yeah. they put a probe on mars, men on the moon and created the computer.
they won wars, stopped violence and built more than one country.

In closing I would like to warmly and cordially invite you to attempt self impregnation.
Thanks for your time!

I was going to comment on whatever point you were trying to make but couldn't because your horrible grammar and spelling kept whacking me in the face like I was Sideshow Bob in an endless field of rakes.

Please, for the love of all that's holy, learn how to put together a cogent point before you sling around words like "false and misleading".