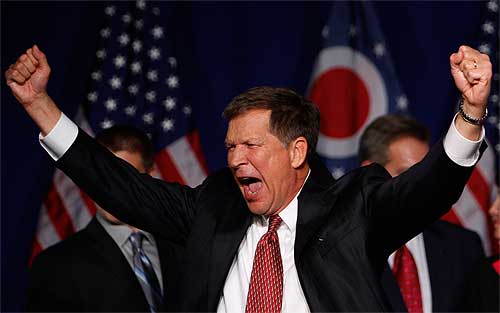 A government debt is a government claim against personal income and private property – an unpaid tax bill.—Hans F. Sennholz

Excessive spending and inflicting debilitating debt is integral to all modern democracies. Why? Elected politicians institute programs for current voters and shift the debt to future workers, even the unborn. Social Security, Medicare, prescriptions drug benefits for seniors are prime examples in America.

In order to force a Convention to convene and amend the Constitution, 34 states must agree to meet. Seeking a constitutionally balanced, federal budget, the Ohio legislature was the 23rd state to call for a constitutional convention. John Kasich (R-OH), Governor of Ohio, recently visited Arizona to convince their legislature to become the 24th state to join the call for a convention. Governor Kasich will continue his quest by visiting Idaho, Utah and continuing on to more states.

In the 1990s, Kasich, as a Member of Congress, recognized our federal government debt was a national catastrophe in the making. Then, a single vote prevented the federal government from writing a balanced-budget amendment that needed to be approved by 38 states. In the intervening years, the national debt has exploded to at least $18 trillion.

As Hans F. Sennholz succinctly stated, A government debt is a government claim against personal income and private property – an unpaid tax bill.

Our national debt is a tax bill that every American will eventually pay. As Americans, it is our duty to help Kasich and other political activists to convince our own and other state legislatures to vote for an Article V convention. It is imperative for America to have a balanced-budget amendment and put a cap on spending. Sadly, a $1.1 trillion spending bill was passed in the dark of the night a week ago, which is a one, prime example of profligate spending.

Kasich explained the political and social forces that made fellow Ohioan, Speaker Boehner (R-OH), to support the egregious $1.1 spending bill. “Part of being an elected official is that you spend money,” Kasich said. “I’ve known John Boehner for 1,000 years, and I know he’s one that wants to see balanced budgets. But I also know the pressure he’s under. He’s just the speaker. He’s not in charge of everything.”

Thus, America needs a constitutional amendment assuring the American public that the federal government will produce a balanced budget. The time has come for an Article V convention. The states are the most powerful countervailing force to a profligate and corrupt federal government. At the same time, the states need to consider and support a compact amongst them for a balanced budget. This, too, is an Article V procedure.

Again, the states are the most powerful, countervailing force to control the debt and corruption that has besieged our federal government. Now...is the time to make it right for all of us.

Yes. We need to force the issue of a Balanced Budget.

This proposal could be a double edged sword and should not be entered into lightly! An article V constitutional convention allows for anything to be put on the table to be placed into the Constitution. Unless everyone is on the same boat on every issue the outcome could be bad!

Carl, with a 3/4 majority of states to ratify the issues coming out of an Article V Convention, how could there be a bad outcome?

The bad outcome is doing nothing and letting the leftist/socialist/marxist/muslims continue to destroy the country!!!

Last I knew we had 34 so-called Republican governors.....out to be enough for Article V action

It is time for the Balance of Powers to be Restored and the States have the Authority to do it. What's more they actually listen to their Constituents sometimes (Washington never does).

Momentum is building in the Texas State House where my State Rep will sponsor the Resolution to Apply for an ArticleV Convention of States at the open of the Session. I am working with a local group of Texans to educate and encourage other State Reps to support the effort. See our campaign here: http://igg.me/at/TXCOS

I, agree it is WAY, WAY, over due, Thank You John Kasich. I, am from Idaho and I, hope our Governor will listen to him