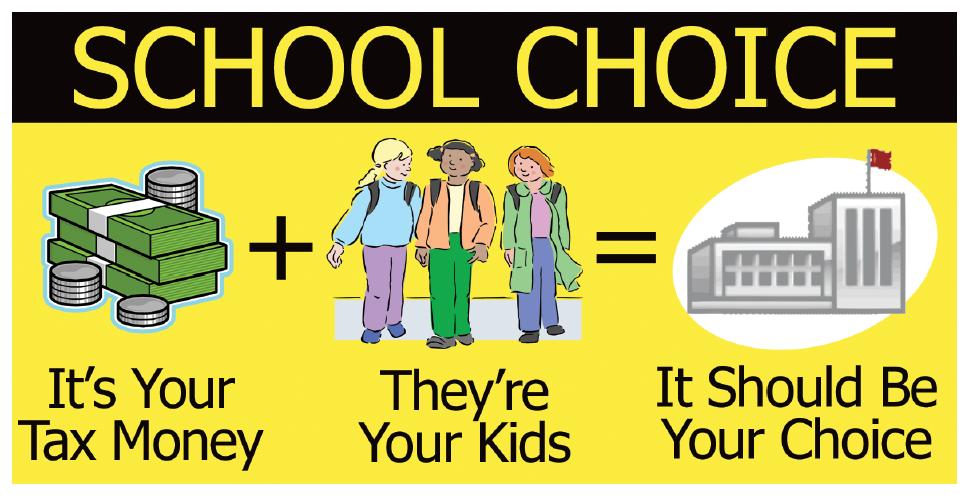 After more than 20 years of experimentation and intense debate, Americans favor school choice. A national survey by Beck Research shows 69% of Americans support school choice, including 60% of Democrats.

“During my time on the D.C. council, I faced firsthand the results of our failing to educate all children. Educational choice has become a lifeline for far too many residents here in the District of Columbia who should be getting what they are entitled to with their neighborhood public school but frankly do not.”

Vermont’s experience with school choice has existed since 1869. Today, every child in 93 Vermont towns may receive a voucher – valued at approximately $14,000 – and is free to attend any public or private school. Similar to our national poll, Vermont's citizens favored school-choice by roughly 70%.

Self-interested and harmful, the very powerful teacher-unions are fiercely opposed to school choice. Our teacher-unions donate millions of dollars into state and federal campaigns. Of the gigantic amounts of money raised, nearly the entire amount goes to the Democratic party, which have blocked most school reform efforts.

“The 2014 midterm elections saw that nearly every pro-school-choice candidate around the country … who campaigned on that issue won. It sends a loud and clear message, particularly to the two largest teachers unions that invested $100 million in those races, only to fall short in the vast majority of them.”

Today, the politics are clearly favorable with 70% of Americans supporting school choice. Kevin Chavous, a former D.C. city councilman, and the Governor Cuomo of New York are actively supporting the concept of school choice. Vermont supports school choice. Now, it is time for parents and community leaders to demand school choice in their school district, state, and nation. If we stand together, a strong grassroots campaign will force politicians to vote for school choice.

As we all know, better educated students will benefit the future of America as well as themselves. As Kevin Chavous, currently executive of the American Federation for Children, claims, “school choice is the civil rights issue of the 21st century.”