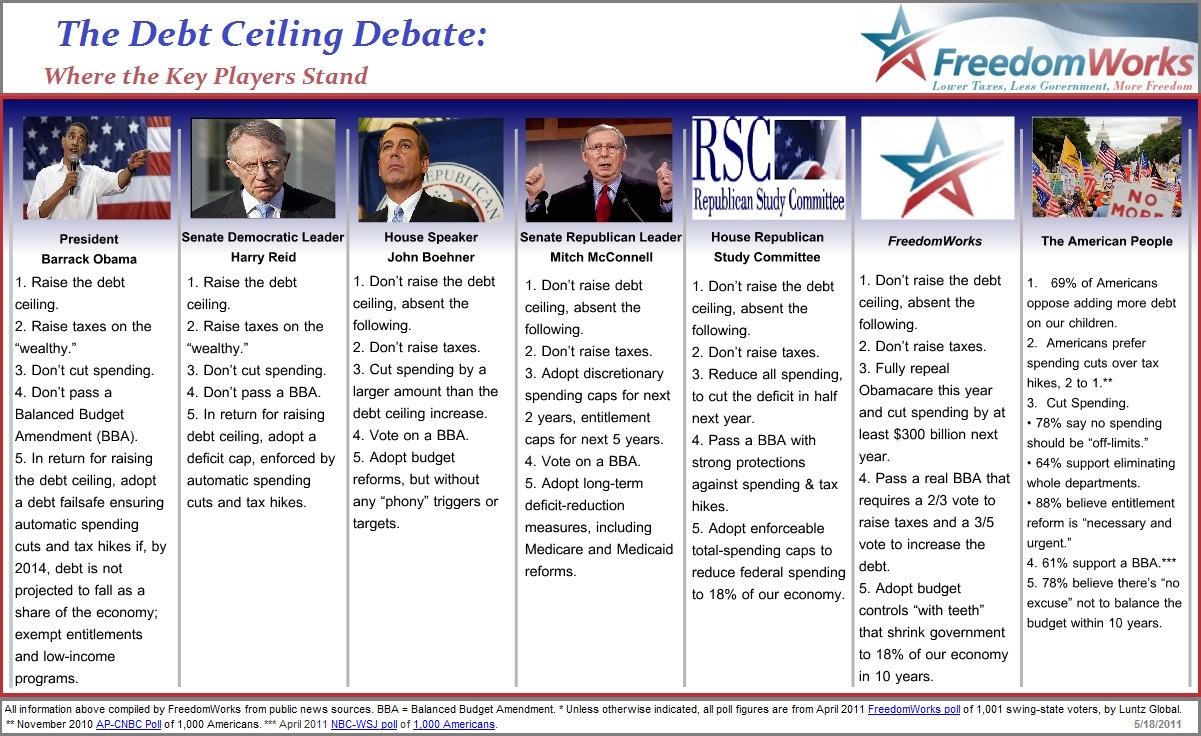 Uncle Sam's credit card is maxed out. On May 16th, the US officially hit its $14.3 trillion national debt limit, set by Congress. Things have reached a crisis.

To avert national bankruptcy, this incredible spending binge has got to stop.

Now comes President Obama, claiming that failure to raise the national borrowing limit by August 2nd will result in the US Government defaulting on its debts, and thus causing global bond markets to lose faith in the U.S. Government's ability to repay its creditors, and thus setting off a panic that results in higher borrowing costs for Uncle Sam, and thus precipitating a Greece-style economic crisis and perhaps political turmoil.

Sigh.  Where to begin!

The truth is, the IRS collects 10 times the amount needed to pay all the interest we owe to all our creditors indefinitely, and more than enough to pay the principal as well.  It's true, to be sure, that we don't collect enough to pay our creditors and all of the myriad other obligations our government currently has. If we don't raise the debt limit at all, we will have to start cutting government spending and living within our means. That may create political challenges for politicians, but it's not a default.

What actually happens if we don't raise the debt limit at all?

The President is demanding a "clean" debt ceiling increase.  That is, he wants to increase the national credit limit without any spending reductions or reforms (except tax hikes).

Congressional Republicans -- and many grassroots Americans of all political parties -- have been responding: "NO! No debt ceiling increase without substantial spending cuts and reforms." High-stakes negotiations are now underway at Blair House near the White House. FreedomWorks's position is simple:

√ First, any measure to raise the debt ceiling must include real spending cuts.  A good start would cut spending by at least $300 billion next year and include a full repeal of ObamaCare. Longer term, Congress must cut and eliminate programs to shrink government by at least 25% within five years, or no more than 18% of GDP.

√ Second, spending reductions should be guaranteed by budget controls with teeth in the form of a law that would implement automatic, across-the-board cuts if Congress fails to enact a responsible budget. Automatic cuts must cover all programs, including Social Security.

√ Finally, Congress must send to the states for ratification a real Balanced Budget Amendment that caps federal spending and makes it much harder to increase taxes or debt. Six in 10 likely voters believe a Balanced Budget Amendment is long overdue. Because Congress has proven incapable of getting spending and borrowing under control on its own, it’s time for the Constitution to force them to live within our means by making it much harder to raise taxes or pile more debt on our children.

Without these kinds of serious cuts and reforms -- no deal.

This debate is important for our country's future. Please take a moment to weigh in.  We all need to put serious pressure on the President and congressional leaders to do the right thing.

P.S. Get some popcorn and settle in. Keep your scorecard handy. This debate will keep us all on the edge of our seats.