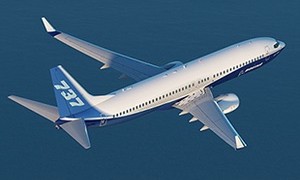 Despite its positive results, Boeing is urging the federal government to maintain subsidies the company receives through the Export-Import Bank.

Boeing is the biggest beneficiary of the Ex-Im Bank – a government program that provides various types of financial support for foreign buyers of U.S. products.

For Boeing, the Ex-Im Bank financing helps the company sell airplanes around the world.

Unless Congress acts to extend the authorization for the Ex-Im bank by July, the bank will close.

The loss of a generous subsidy has corporate executives in a panic.

Last week, an executive at General Electric threatened to move jobs overseas if the bank was closed and now the CEO of Boeing recently issued a similar threat.

“Most of my engineering and manufacturing jobs are in the United States and I’d like to keep it that way. But without Ex-Im financing, you’d have to start asking the question” about where they should be, McNerney said at a conference sponsored by the U.S. export credit agency.

“Boeing can survive, for sure … but the competitiveness dislocation would be significant,” he added. “If Ex-Im goes away, you’d have the ‘Wild West.'”

Boeing has about 165,000 engineering and manufacturing jobs in the United States, a company spokesman said. Some of an estimated 1.5 million jobs in the company’s U.S. supply chain could also be in jeopardy if U.S. credit support ceased, McNerney noted.

While McNerney is issuing threats through the media, he is unwilling to personally bring his concerns to Congress.

According to Reuters, McNerney has declined the opportunity to testify at a Congressional hearing on the Ex-Im Bank.

If McNerney is so passionate about keeping the Ex-Im Bank, he should bring his case before Congress.

We would not be facing this dilemma If we made America a safe haven for income. In fact we would have at least 12 Trillion of private investment money flooding into the United States that would make QE's look like Little Orphan Annie without the inflation of government funny money. But far be it from me we actually do something to gain ground, let's just keep fighting defense like we did in Vietnam. That turned out well.

Alexander Hamilton wrote and excellent paper in Federalist 21 explaining the advantages of a consumption tax over income taxation. We need a flat consumption tax on new retail only. New retail is the key to defeating the liberal argument that consumption taxes are regressive to the poor. Of course all real thinkers realize that ANY tax is regressive to poor because any dollar whether taken or given through purchase is regressive. The big difference is you don't confiscate the poor's earnings before they can spend to survive, save or invest. Today we punish success, savings and investments. This puts downward pressure on upward mobility. If we wish to stop the exporting of jobs, we must stop punishing success and make hiring American a lot more attractive with no more matching FiCA, tax collection from every employee etc. We don't need a reset. We CAN grow our way out of debt. Just protect income from government confiscation.

President Barack Obama declared April 9 “National Equal Pay Day,” – a date chosen to supposedly mark how long into the new year women have to work to match the male median wage of the previous year. Obama has repeatedly lamented that women earn “up to 23% less on average” than men do; it’s a good talking point for a president who captured more than half of votes cast by women in 2012.

In Tuesday's State of the Union Address, President Obama proposed raising the federally mandated minimum wage to $9 per hour, a 24% increase over the current mandate. In a subsequent conversation, my friend David Guenther of the Texas Public Policy Foundation made a good point about the effects of this if it were to come to pass:

So much for a mandate. As President Obama heads into his celebrated, historic and transformational second term, the American people are distinctly distrustful of the government over which he presides.For the first time ever, a majority of the public says that the federal government threatens their personal rights and freedoms. The Pew Research Center found that 53 percent of Americans view the feds as a threat while only 43 percent disagree.

When President Obama came to office, he promised that government would solve all kinds of problems. The economy would boom, war would end, and the scourge of crabgrass would never again despoil suburban lawns.Progressive believers never doubted that Washington could merely snap its fingers and the infinitely complex global economy would snap to attention. Even the ocean levels would obey President Canute.

In one of the more infamous statements regarding the process in which Democrats sought to force-feed health care reform to the American people, former Speaker of the House Nancy Pelosi quipped, "We have to pass the bill so you can find out what is in it".

The man who would usher in an era of 'hope and change' with his election in 2008, begins 2012 having practically eliminated any hope for small business owners.  The recent release of the Small Business Optimism Index bears this out, with uncertainty reaching new record highs, even following a first term already marked predominantly by economic and regulatory uncertainties.

Mourning in America - Here's Those Layoffs We Voted For Last Night

Last night's victory for the President marks the first time since its inception that Obamacare is no longer a what-if; it is the future of health care in America.

Just over three years ago, Vice-President Joe Biden announced a new $500 million stimulus funded jobs training program.  The new initiative would be aimed at training unemployed workers to compete and attain employment in the administration's coveted field of 'green jobs'.  At the time of his announcement, Biden stated that the program would create "real live jobs for a real live future".

0
10/31/2012
Drilling For Jobs? Yes We Can!
"https:\/\/www.freedomworks.org\/content\/drilling-jobs-yes-we-can?social=facebook_share"
null
https://fw-d7-freedomworks-org.s3.amazonaws.com/styles/thumbnail/s3/te_social_media_share/fw_default_0.jpg?itok=35IWEBMb
Blog