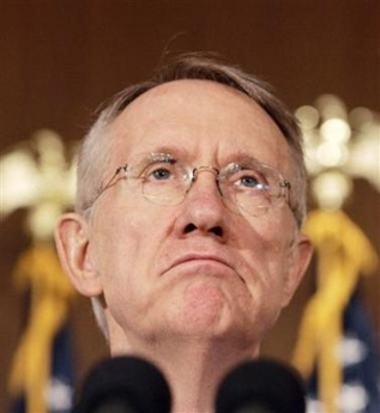 Reid's not about to let a little thing like the Constitution stand in the way of his agenda.

Update: On July 16, the Senate failed to get the necessary two-thirds majority to bring Murray's bill to a vote, rendering the legislation dead, at least for now.

I’ve written before about the way Harry Reid runs the Senate like his own private club, refusing to allow amendments from Republicans and employing the nuclear option to undermine the rights of the minority party. Now it appears as though he wants to extend his authority into the third branch of government as well, overruling the Supreme Court and taking over their function of deciding what is and is not constitutional.

In the wake of the Hobby Lobby decision that has been whipping liberals across the country into sputtering, incoherent wrath, Sen. Reid has declared cryptically that he plans to “do something about the Hobby Lobby legislation.” From this, one can infer that he will attempt a legislative override of the Court’s decision. This is not as impossible as it at first sounds, given the nature of the majority opinion in the Hobby Lobby case.

The ruling appealed to the Religious Freedom Restoration Act, a law that prohibits the government from unduly burdening the religious freedom of individuals, while preserving the ability to ban certain religious practices like polygamy and human sacrifice. Since the Court based its decision on this law, and not the Constitution itself, Reid probably intends to amend the Religious Freedom Restoration Act, thus undercutting the ground on which Justice Alito’s opinion rested.

This is why some of us were disappointed in the narrowness of the Court’s ruling. By refusing to address the constitutional issues underlying freedom of association and freedom to contract, the Court may have avoided a can of worms that would have led to challenges of a great many other laws, but it also left the door open for legislative action’s like the one Reid is planning.

Even in more clear cut cases of constitutionality, however, there’s nothing preventing Sen. Reid from bringing up and passing laws that contradict the Court’s existing ruling. Theoretically, provided he could get enough support from other members of the Senate, the House, and the President, he could pass a law explicitly forbidding Hobby Lobby from doing what the Supreme Court ruled they could do, knowing that it would take time for the law to be stricken down again. The Supreme Court is the slowest moving of the branches of government, and Reid could exploit this fact to impose his agenda on the country, even if it meant violating his oath to protect and uphold the Constitution.

Today, Senate Democrats introduced legislation that made the meaning of Reid’s words clear. The proposed bill would prevent private, for-profit companies from seeking exemptions to the Affordable Care Act’s contraception requirement. Sen. Patty Murray sponsored the bill, and it is co-sponsored by 35 of the usual Democratic suspects, including Sen. Mark Begich of Alaska and Mark Udall of Colorado.

While this bill is unlikely to pass, failing to acquire any Republican co-sponsors, Sen. Reid and his allies are likely using the issue to create a media spectacle and gin up the troops before the November elections. The more angry Democrats are, the more likely they are to turn out at the ballot box. This is especially important given some recent analysis of voter turnout for the primaries, showing Republicans with a significant advantage going into the general election.

For a Senate Majority Leader to abuse his position, as Reid has, not only to disingenuously enflame Democratic outrage, but to actually threaten to override what is supposed to be the last word on the Constitution, is shameful, and underscores once more the importance of achieving a Republican majority next year.