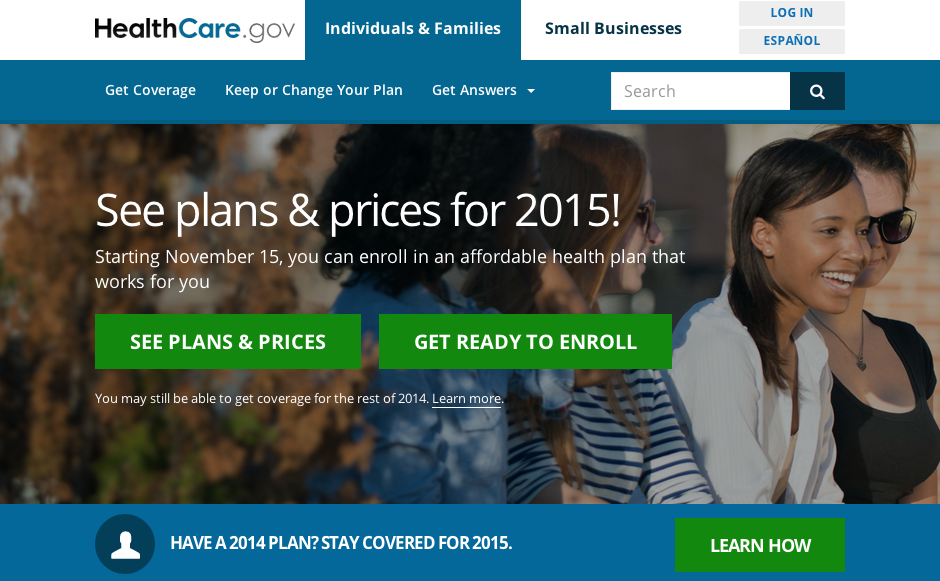 More than a year after the Obama administration launched the federal ObamaCare exchange, HealthCare.gov, is still giving health insurance companies problems. Though the second open enrollment period is just days away from launching, backend systems that are supposed to communicate with insurers aren't yet finished, according to Politico:

While consumers who click onto HealthCare.gov will see a cleaner, simpler application page, insurers still have headaches. They interact with the website’s so-called back end, which is supposed to tell carriers who signed up and to pay out Obamacare’s subsidies.

That part still doesn’t work as it should. Insurance industry sources say the Centers for Medicare and Medicaid Services (CMS) had sorted through about 80 percent to 85 percent of existing accounts to make sure its records match those of insurers. The agency is not likely to be done by Saturday; the latest best-case scenario is for the job to be finished by Dec. 15.

The date is key because anyone currently covered who doesn’t either re-enroll or pro-actively opt out will automatically be re-enrolled in the same plan or the closest match for 2015. But with all the gaps in the system, consumers could find themselves in the wrong plan — or even enrolled in more than one plan. Nor will the health plans always know promptly if a customer dropped one plan and chose another (even though the “834s” — those initial enrollment files that nobody had ever heard of until they gummed things up last year — are pretty reliable now).

CMS has been using cumbersome workarounds to clear up the records and calculate subsidy payments. But it’s been messy, even without a wave of potentially millions of new enrollees added to the mix. The solution — a computer-facilitated automatic monthly reconciliation and payment process — fell by the wayside with last year’s rollout disaster. Insurers don’t expect it to come online until sometime next year.

And though President Obama says the administration is working to make sure HealthCare.gov performs "super well," the Washington Post reports that officials are crossing their fingers in hopes that they won't see another disaster. For example, they're planning to use "throttling" if the system becomes overloaded, basically turning the experience into a DMV where customers take a number and wait their turn for service.

The administration also appears to be vastly behind on notices to consumers who already have coverage through the exchanges. These notices, due to arrive on Saturday, when the open enrollment period begins, contain subsidy eligibility information. If consumers decide not to go through the process of picking a new plan, given the dreadful experiences they may have had last year, they're going to be on the hook for significant premium increases, as the Wall Street Journal notes. So, if they decide to return to HealthCare.gov to look for a better deal, the overload of traffic could bring another repeat of last year.

The Obama administration has committed $1.7 billion in contracts for HealthCare.gov over the last five years, and the website and data systems still may not work as planned. Obviously, no one really knows whether HealthCare.gov will perform without glitches on Saturday, but these stories don't really inspire a lot of confidence.