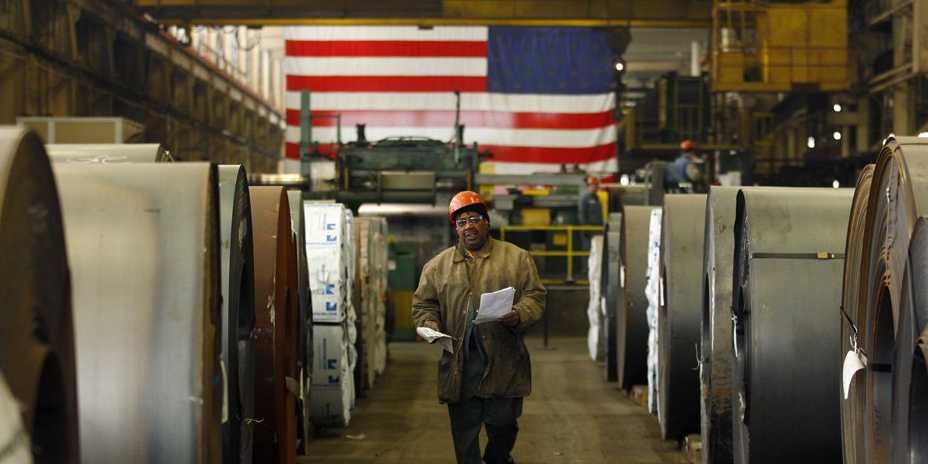 Made in the U.S.A. was proudly stamped on almost every part of American life. From the most intricate part of the internal combustion engine to the basic design of the farmers plow shear, we worked together moving forward. As echoed by Henry Ford, “[I]f everything is moving forward together, then success takes care of itself.” But when is the last time you held a power tool that was stamped “Made in the U.S.A.”?

Under the Obama administration, massive regulations were set in place that made it harder and more expensive for manufacturers to keep up with the world. In fear of bankruptcy under the pressure of overwhelmingly burdensome regulations imposed by federal agencies, many were forced to export their businesses overseas. If the U.S. was able to maintain growth rates from twenty years ago, America’s manufacturing sector would, in fact, be $1 Trillion bigger than it is today.

Thirty percent fewer Americans are employed in manufacturing now as compared with twenty years ago. The greatest setback on U.S. manufacturing has been the decades-long encroachment of the regulatory state. Today, more than 300,000 regulators wielding a massive budget of $60 billion are standing between you and your American dream. Compliance with the demands of regulators is costing manufacturers on average $20,000 per employee per year, while smaller manufacturers (those with fewer than 50 employees) face costs upward of $35,000 per employee per year. As a matter of fact, surveys find that America’s manufacturers regularly rank regulatory burdens as the top impediment to growth; a large majority also say the regulatory cost are higher in America than in other nations.

On average, the Obama administration's Department of Labor finalized nearly twice as many major labor regulations per year than the previous four administrations. This blatant disregard for the blue collar American worker will come at a cost. The National Association of Manufactures estimates that over 155,700 jobs will be lost and compliance costs will rise to $81.6 billion over the next 10 years. Just six major regulations require near 412 million hours of paperwork, this comes out to about 12 years of 40 hour weeks just for paperwork.

It came at no surprise to find that America is consuming more foreign goods than we export, contributing to today's manufacturing trade deficit of about $600 billion. Today, manufacturing accounts for the single largest share of all U.S. exports. There are 30 percent fewer jobs in the U.S. manufacturing sector than there were in 1997 and over the past decade, world manufacturing’s contribution to global GDP had risen by $3 trillion while the U.S. has been left in the dust with our contribution being only $500 billion, almost all of which occurred before 2008. The U.S share of global manufacturing has declined from our longtime level of 25 percent to about 15 percent over the past 20 years.

History shows that an increase in productivity usually credited by innovations that reduce the number of labor hours per unit of output, leads to a lower cost of goods, increased wealth, and a faster economic growth. But with crippling regulatory costs, American business owners are forced to keep using the same worn out machines, they miss out on opportunities to innovate and to make their jobs more efficient, being unable to raise the quality of their products because they’re being backed into a corner by federal regulations.

Throughout his campaign, Donald Trump promised to revive the U.S. manufacturing and over the past seven months since taking the oath of office, Apple, Foxconn, Intel, Exxon, And Hasbro have announced plans to expand or restore U.S. based manufacturing operations. Just four days after taking office, President Trump issued a Presidential Memorandum Streamlining Permitting and Reducing Regulatory Burdens for Domestic Manufacturing. The memo directs executive departments and agencies to “support the expansion of manufacturing in the United States” and instructs the Secretary of Commerce to “submit a report to the President setting forth a plan to streamline Federal permitting process for domestic manufacturing and to reduce regulatory burdens affecting domestic manufacturers.” This action was followed by a string of Executive Orders calling for a slash in regulatory burdens. When carried out we will have had the largest cut in regulations since the Reagan era.

The problem is not trading whether it comes in the form of imports or exports, the problem is not the fact that China is surpassing The United States in manufacturing. We must look to the root of the issue, the problem is that for too long, federal agencies have consistently turned their back on the American worker, government control of the economy is out of control, at the expense of blue-collar America, the Federal Government continues to restrict struggling industries from progressing.

Trade between countries is vital for progress, in Wealth of Nations, Adam Smith writes, “The labor of the rich country is not always much more productive than that of the poor; at least, it is never so much more productive as it commonly is in manufactures.” He goes on to say, “This great increase of the quantity of work which, in consequence of the division of labour, the same number of people are capable of performing, is owing to three different circumstances; first, to the increase of dexterity in every particular workman; secondly, to the saving of the time which is commonly lost in passing from one species of work to another; and lastly, to the innovation of a great number of machines which facilitate and abridge labour, and enable one man to do the work of many.”

The world economies can work successfully together and learn from each other, as long as government stays out of the way, we will innovate, we will create new and better ways within our trades. But as long as the American worker is more restricted throughout the world, we will come in last, we will continue to cut jobs and the pink slips will be ever more prevalent.

With more money in the pocket of the American worker we will clearly see once again how obtainable the American dream is, and together united we will rise again as leaders of innovation, pioneers of progress, and consummate the imagination of our children into something real and tangible. Let’s leave a future for those who follow us, a future where in the words of John F. Kennedy we “seek to invoke the wonders of science” and “together let us explore the stars, conquer the deserts, eradicate disease, tap the ocean depths and encourage the arts and commerce.”