Here's why the already bloated Farm Bill is getting more expensive 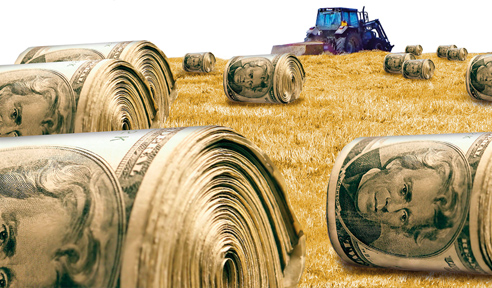 When the House of Representatives passed the farm bill earlier this year, Speaker John Boehner (R-OH) hailed it as a accomplishment because, he said, it "maintains critical assistance for families in need and improves programs for producers while cutting the cost of government."

Uh, no, Mr. Speaker, the farm bill didn't cut the cost of government. First, the Cato Institute's Chris Edwards pointed out around the same time the bill passed Congress that "the 2014 farm bill is not a cut at all when compared to the 2008 farm bill, which was projected to cost $640 billion over 10 years." Only in Washington can a 49 percent spending increase mean Congress is spending less.

Secondly, the $956 billion price tag for the farm bill is only going to grow. Congress wasn't living in reality when it created the shallow-loss crop insurance program, an uncapped entitlement that replaced direct subsidies. And, as a result of larger than expected crop yields that have driven down market prices, taxpayers are going to be hit with the costs:

A record U.S. harvest has pushed crop prices so low that taxpayers may pay billions of dollars more to subsidize farmers than anticipated just months ago, thanks in part to changes Congress approved this year.

Lawmakers passed a five-year farm law in February and hailed its projected savings in subsidies of $14 billion over a decade. The forecast was based on farmers getting paid more for their crops. Instead, prices have fallen and may trigger subsidies the law aimed to reduce....

Payments to growers of corn, peanuts and other crops may reach $6.5 billion for this year’s harvest, or about $4 billion more than lawmakers anticipated in the farm bill, said Vincent Smith, director of the Agricultural Marketing Policy Center at Montana State University.

And keep in mind that these subsidies are going to mostly wealthy farmers and the largest farms. Oh, and while direct payments had to be renewed every five years under previous iterations of the farm bill, the version passed by Congress earlier this year makes this brand of corporate welfare permanent. The shallow-loss program isn't a safety-net for the agricultural industry, it's a decked out, gold-plated hot tub.

On behalf of our activist community, I urge you to contact your representative and tell him or her to support the President Trump’s Farm Bill Reforms Act, H.R. 5629, introduced by Rep. Ralph Norman (R-S.C.). The bill would reform and modernize the subsidies the federal government grants as a part of its omnibus Farm Bill.