Here's Why You Got the Presidential Alert on Your Smartphone 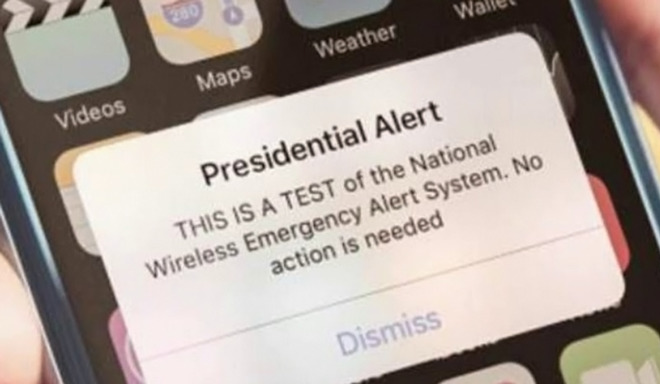 “THIS IS A TEST of the National Wireless Emergency Alert System. No action is needed,” the alert stated. Millions of smartphone users got the message on Wednesday around 2:20 pm. The alert was originally scheduled to be sent on September 20, but Hurricane Florence forced a delay. Unlike other emergency alerts, smartphone users can’t opt out of what has been dubbed the “presidential alert.”

Of course, some have voiced concerned about the alert. Filmmaker and leftist propagandist Michael Moore tweeted, “A few minutes ago, Trump gave us a preview of the state of emergency he is creating to justify the end of democracy as we know it. RESIST!” He also plugged his new film in the tweet. (After all, never waste the opportunity to make money. Some socialist, right?)

Before the alert was set to be sent, a temporary restraining order was filed in the U.S. District Court for the Southern District of New York to block the alert from being sent. The case was dismissed, allowing the alert to proceed.

Although it may be concerning that there is an alert being sent to smartphone users because they can’t opt out of it and a theoretical possibility of misuse by federal officials, particularly President Trump, the law is relatively mundane and little more than an update to existing law.

In 2015, Congress passed the Integrated Public Alert and Warning System (IPAWS) Modernization Act, S. 1180, sponsored by Sen. Ron Johnson (R-Wis.) and Sen. Claire McCaskill (D-Mo.). The bill was passed by unanimous consent in the Senate on July 9, 2015. The House passed the IPAWS Modernization Act by voice vote on March 21, 2016. President Barack Obama signed the bill into law on April 11, 2016. The Congressional Budget Office (CBO) scored cost of the bill at $37 million over five years.

The IPAWS Modernization Act updated the existing IPAWS system for federal, state, or local authorities “can alert and warn the civilian population in areas endangered by natural disasters, acts of terrorism, and other man-made disasters or threats to public safety.”

The bill also created the Integrated Public Alert and Warning System (IPAWS) Subcommittee, which includes members from federal, state, and local government agencies and private entities. The subcommittee, which exists for only three years, made recommendations on how to implement the alert. Those recommendations were submitted and approved by the National Advisory Council. The alert sent on Wednesday was done by the Federal Emergency Management Agency (FEMA), in coordination with the Federal Communications Commission (FCC).

Why can’t smartphone users opt out of the alert? The IPAWS Modernization Act didn’t include any provision or allow for any regulation that allows smartphone users to opt out. The Warning, Alert, and Response Network (WARN) Act, passed in 2006 as part of the Security and Accountability For Every (SAFE) Port Act, allowed wireless subscribers, Section 602(b)(2)(E) to opt out of emergency alerts “other than an alert issued by the President.”

Perhaps Congress should revisit allowing smartphone users the ability to opt out of the “presidential alert.” That may ease the minds of those who are concerned about abuse of IPAWS. Some may dismiss the concerns about abuse. Although comments like those made Michael Moore and the lawsuit to stop the alert border on the silly, the growth of the federal government, no matter who sits in the Oval Office or his or her party affiliation, mixed with an alert that feeds information to the public should give everyone pause.

Follow my words and get this web address which allows you to catch ideas how to remove https://deletecookieswindows10.com/ cookies from chrome or internet explorer web browser. So i am a great fan of this online tutorial. Thank you to share!

Last week, after Right-to-Work passed in Michigan, many were celebrating workplace freedom in the historic union stronghold. Some, however, were less than thrilled. Take, for example, Michael Moore, hypocrite extraordinaire who took to Twitter to express his displeasure.

To the surprise of absolutely no one, the Wall Street Journal noted last week that members of so-called "Generation Y" are heavily in favor of President Obama's proposed health care reform, despite the fact that they will be the ones left to deal with the fallout from long-term cost overruns and degraded quality of care.