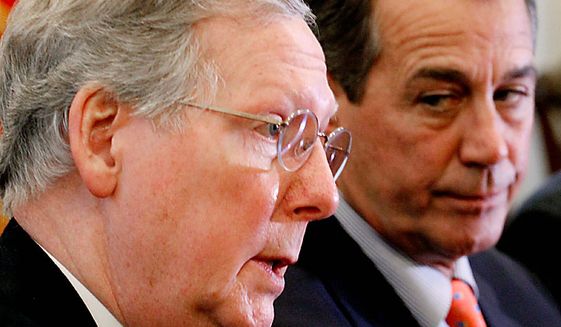 In the nearly five years since ObamaCare passed Congress and became law, Republican leaders have yet to rally around a specific set of healthcare alternatives. Railing against the 2010 law has been convenient for campaign trail rhetoric, but stalling, as the Supreme Court prepares to hear oral arguments in King v. Burwell, is no longer acceptable.

It's not like there haven't been patient-centered alternatives proposed. Rep. Tom Price, MD (R-GA) has introduced the Empowering Patients First Act for three consecutive Congresses. The Republican Study Committee, in 2013, introduced its alternative, the American Health Care Reform Act. Rep. Paul Broun, MD (R-GA), who no longer serves in Congress, introduced the Patient OPTION Act, which was endorsed by FreedomWorks.

Republican leaders, however, haven't, you know, actually led in this particular area. There have been several votes to repeal ObamaCare, but no alternative with which to replace it. They've continued to kick the can down the road, hoping to placate their base with more rhetoric about a law that is unpopular with the American public. This lack of substantive action may have worked for a time, but it may actually matter now.

On March 4, the Supreme Court will hear oral arguments in King, a case which challenges the legality of an IRS rule allowing subsidy payments for health plans purchased through the 36-state federal ObamaCare exchange. The basis of the case is that the text of the Affordable Care Act explicitly says that these subsidies, which artificially lower premiums for qualifying consumers, are available only to "an exchange established by the State."

Jonathan Gruber, the controversial MIT economist who helped the administration craft the law, agreed with this interpretation of the statute on various occasions, which, he suggested, places political pressure on governors and state legislatures to participate in ObamaCare. In fact, his comments are cited by the plaintiffs in their petition to the Supreme Court.

If the Supreme Court rules against the Obama administration, which argues that the statute should be broadly interpreted to apply to the federal exchange, one of the biggest features of ObamaCare fall. Consumers who've received subsidies would see the true cost of coverage -- or, to paraphrase President Barack Obama, costs would necessarily skyrocket -- likely leading to a mass exodus of enrollees from the exchanges.

Politico, via HotAir, recently noted that the administration isn't telling enrollees that the subsidies could be in jeopardy and that an overly confident President Obama recently told Sen. John Barrasso (R-WY) that he "doesn’t anticipate the need for a contingency plan" should the Supreme Court rule against him in a decision expected this summer.

Well, there probably is a contingency plan, and it's one that will most likely rest on placing political pressure on Congress and/or states to prop up ObamaCare. That means the onus to lead is on congressional Republicans, which is why FreedomWorks, in our letter to Speaker John Boehner (R-OH) and Senate Majority Leader Mitch McConnell (R-KY), urged Republicans to put forward "principles for reform that put patients and consumer choice first."

Passing a consumer-friendly, patient-centered alternative may still be a big hurdle, but coalescing around such a plan would prove to the American public that Republicans do have answers to fix a still broken healthcare system.

Great photo, as it turns out they are actually wolves in sheep's clothing!!!

JASON PYE You are so so so wrong ! The Republican Health Care savings plan has been around for years. And most of it has already been enacted in Private Sector Law. Tax exempt Law for individual Corporation and their Employees to invest in By Payroll healthcare Corporation Health Care plan that fits their needs not some bureaucrat in Washington. Its An Investment Plan and Its Been Tax exempt for years in LAW!!
JASON PYE What Planet do you live on and not know this !!???

How about no government controlled insurance. Leave it up to your employers or yourselves.
Years ago, my Father was asked to do a papr for the government on government sponsored insurance. He was dead set against it. A couple of reasons I remember offhand that he thought the quality of doctors would decrease, and the costs would go sky high. Well guess what we are there now.