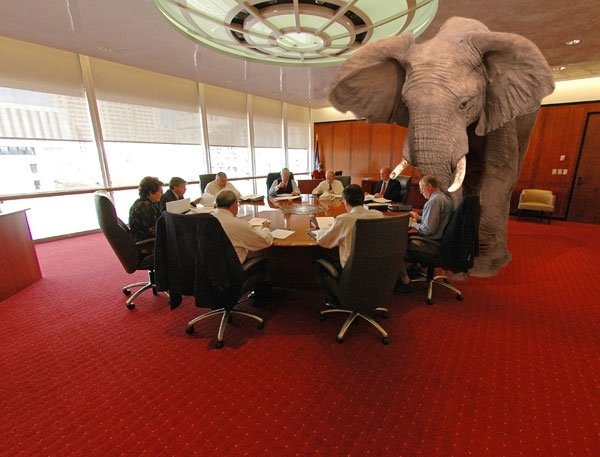 Of course, like many Common Core proponents, he lays out the case that our educational 'system' is broken, leading to a lack of achievement. This has become all too common in the big government / crony capitalist movement: create a straw man crisis, and then invent a big government solution that expands the feds' role in our personal lives. And like the global warming movement that is poised to exponentially increase the revenue of its proponents, Common Core will provide government and its cronies with access to resources previously unavailable - student tracking data and control of our childrens' education track.

As a nation, we must unite in recognizing the mounting evidence that the U.S. is falling behind international competitors in producing students ready for 21st-century jobs. According to the most recent Program for International Assessment, U.S. students rank 14th in the world in reading, 17th in science and 25th in math—and the trend line is moving in the wrong direction.

We have an opportunity to reverse this trend but it will take setting the right priorities. That starts with establishing high standards. It means leaders from government and business, and parents, need to defend the Common Core State Standards, which have been adopted wholly or in part by dozens of states in recent years but are increasingly under attack from across the political spectrum.

There are several problems here. The first and most basic assumption is that we have an educational system in this nation. This is false. We have a network of public and private schools under local jurisdictions, along with religious institutions, a rapidly expanding homeschool movement, charter schools, and even online schools that, depending on the local laws, can provide an expanding menu of choices to parents and students who wish to maximize their educational achievement. An educational system, conceptually, is a centrally planned and homogenized program that provides the same education to all young Americans regardless of personal or regional differences in needs. Centralized planning of anything is anathema to the American experience - or at least used to be.

Did you notice the language Tillerson used in that first sentence? "As a nation, we must unite in recognizing the mounting evidence that the U.S. is falling behind international competitors in producing students ready for 21st-century jobs." Sounds vaguely familiar, doesn't it? "The costs of inaction are undeniable. The lines of scientific evidence grow only stronger and more numerous. And the window of time remaining to act is growing smaller: delay could mean that warming becomes 'locked in.'" This quote comes from A Republican Case For Climate Action, and sounds eerily similar to Tillerson's line of thinking. It's almost as if Tillerson wants to create the impression that the science is settled, and that no serious questions remain about the state of the crisis or the program drawn up to address it.

As my colleague Amelia Hamilton says, "When something just doesn’t make sense, we’re told to follow the money. In this case, as in so many others, that could be the key." Tillerson and his company are big backers of Common Core, traveling in the same circles as the Bill and Melinda Gates Foundation and Jeb Bush's Foundation for Educational Excellence (apparently unironic acronym: FEE). Amelia elaborates:

The Bill and Melinda Gates Foundation is the significant, although not the only, financial force behind Common Core. Bush’s Foundation for Educational Excellence has also been the beneficiary of their largesse. Could that be why the group now puts out pieces such as this e-mail entitled “Debunking Common Core State Standard Myths,” which is a collection of pieces in support of common core? It certainly seems to fit.

Tom Borelli is the Senior Fellow of the Market Freedom Project for FreedomWorks, and was none too pleased about Tillerson's remarks. In an email, he said:

Tillerson’s endorsement of Common Core is yet another example of the big business establishment joining ranks with big government to expand centralized control of our lives. With Common Core, Tillerson is joining other big businesses, the Gates Foundation and the Department of Education to ram a one size fits all approach to education down the throats of American families.

If Tillerson really cared about education and his future employees he would endorse School Choice options allowing families to pick the educational choices for their children and keep education on the local – not national level.  Of course, endorsing School Choice would alienate the teachers union and the Obama administration and risk regulatory retaliation against Exxon Mobile’s business interests.

Sadly, Tillerson’s endorsement of Common Core illustrates the lack of leadership and courage that exists in too many board rooms.

Now, for the record, I think it a laudable goal to increase math, science and technology proficiency in our students. It is easy to see how proponents of Common Core could be persuaded by the argument that we should increase our educational standards to compete in a global economy. But it seems clear that these attempts are misguided, and may be borne of ulterior motives. If we truly care about our children, there are far better ways to help them than to centralize their lesson plans. A columnist in Michigan, commenting on that state's recent debate about adopting Common Core, points out a virtually universally overlooked fact:

With respect to the crisis, assuming there is one, it is meaningless -- and painfully so -- to raise standards or expectations to lofty heights when achieving those goals will mean little to the mathematician, engineer, or physicist who can't find a job in his or her profession.

This really gets at the heart of the matter. The Left and proponents of big government claim that increasing educational results is good for the economy and will create jobs. While a well educated workforce is indispensable, it is foolhardy to say that jobs will magically appear if and when sufficient education is provided to all students. They have, simply put, reversed cause and effect. A much better approach is to create a strong environment for job creators in the private sector. This should go hand in hand with real choice in education, creating competitive forces that will lead schools to be motivated to do better for their students.

Instead of ferreting out and solving the real root of the problems we face in public education, too many big government central planners and their corporate cronies are pouring untold sums of wealth into falsly defining crises that only big government can solve. It's time for Rex Tillison, Jeb Bush and everyone else involved in pushing Common Core to step back and really examine the situation and provide competitive, free market solutions on a local level. Instead, they are hell-bent on pushing centralized schemes that have little to do with actually educating our children.