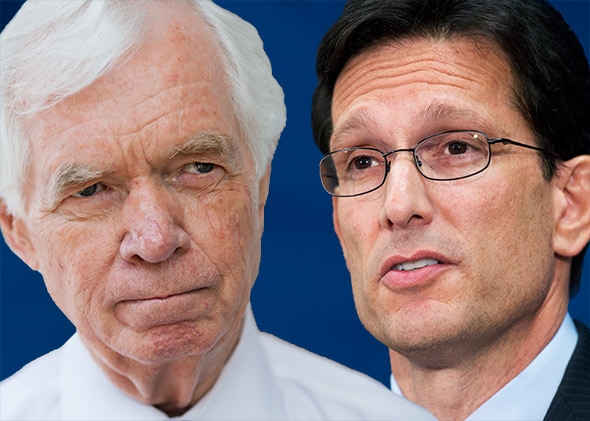 Harmfully, the vast majority of the voters are rationally ignorant of most of our government actions. The public is ignorant of bills, legislation, regulations and taxes that ultimately impact their lives.

Representative Eric Cantor (R-VA) has lost to a small-government conservative. Senator Thad Cochran (R-MS) has a runoff against a small-government conservative. In years past, both politicians would have easily prevailed in their respective, Republican primaries. Before, the voting public would never have known of Cantor’s and Cochran’s voting records and their exorbitant spending of taxpayers’ money. Previously, their constituents would not recognize the name or philosophies of the politicians’ opponents.

Today, Americans know the federal government is spending too much. Americans know the debt is increasing, and we know governmental spending and debt is paid by our hard working taxpayers. Cochran is known as the king of pork and Cantor has the reputation of catering to Wall Street. A knowledgeable, motivated and networking public is rejecting big spending and crony politics by putting the word out, utilizing the Internet and casting their votes publicly.

Through the Internet and networking with friends, American voters have become aware of every level of political corruption and duplicity. Additionally, Americans sense hierarchical, party control on both sides of the aisle. Not to mention, the special interest favors undermining our freedom and prosperity. And so... two powerful Republicans have been called out by their voters.

For the moment, our Republican voters are no longer “rationally ignorant,” and are generally aware of the excessive spending and debt evils. An immense improvement, the power of the Internet and our voting choices will be a positive influence on legislation and spending. Politicians crave power and prestige, and they always seek to be re-elected.

The next task for people seeking a small, honest and competent government is to continue communicating through the Internet. Our power is knowledge, and we must continue to emphasize that government spending is ultimately a tax on every American. We must utilize our efficient methods of communication to broaden our message and make more Americans aware of the essential elements of freedom and prosperity – protecting property, a stable legal order upon which every American can anticipate a just application of the law, and the absolute necessity of virtue – virtuous politicians.

America Approves Of The Tea Party and Wants Obamacare Defunded

A shocking poll was released today by Rasmussen Reports that absolutely obliterates commonly repeated themes, by both Republicans and Democrats; that the Tea Party is too extreme for the average American voter. Indeed, the poll results are a clear vindication of limited government movement, both on principles AND on strategy.