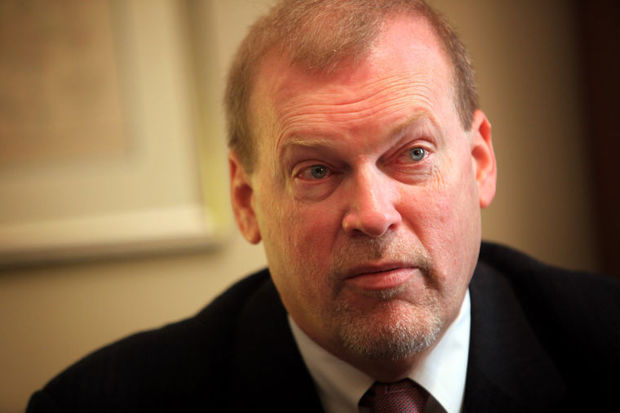 Rep. Morgan Griffith (R-Va.), a member of the House Freedom Caucus, has been a champion of the Holman rule

While it's a minor battle, the House adopted a rules package Tuesday that temporarily brings back a little-known provision that allows Members to introduce amendments to appropriations bills to reduce the size of a federal agency's workforce or adjust salary levels for an agency's employees.

Named after Rep. William Holman (D-Ind.), the "Holman Rule" was first adopted by the House in 1876. Holman, a member of the House Appropriations Committee and a fierce opponent of federal spending, introduced the amendment to reduce extraneous spending. The Holman Rule was part of the House rules from 1876 until 1895. It was adopted again as part of the rules in 1911 and survived intact until 1983, when Democrats, who had the majority in the House, nixed it.

In recent years, the Holman Rule has been championed by Rep. Morgan Griffith (R-Va.), a member of the House Freedom Caucus. During an April 2016 House Rules subcommittee hearing, Rep. Griffith explained that the elimination of the Holman Rule has resulted in the loss of legislative power to the executive branch.

"I would submit that under the Holman Rule, although I have no examples to give you today, but I would submit that power was a congressional power that we ceded in 1983, which I don’t think was appropriate," Rep. Griffith said. "[I]t worked for both Democrats and Republicans before. It can work for both Democrats and Republicans again. More importantly, it works for the people of these United States because it is a fairer process."

Rep. Griffith continued to advocate for the Holman Rule after the hearing. "If you’re going to cut the deficit this is the way to do it," he told an in-district newspaper. "Everybody wants to fight because it’s not the way we did things, but is was the way we once did things. I think it will free us up to do debates on the deficit."

In September, Rep. Griffith proposed the Holman Rule for inclusion in the House rules for the 115th Congress. While there was opposition within the House Republican Conference -- notably from Reps. Tom Cole (R-Okla.) and Rob Bishop (R-Utah), according to Roll Call -- the effort to remove the Holman rule from the rules package was unsuccessful.

Some House Democrats complained about the reinstatement of the Holman Rule prior to the vote on the rules package, foolishly suggesting that it is an attack on federal workers. "Reinstating the so-called 'Holman Rule' would allow any Member of Congress to simply offer an amendment that could reduce the salary of any federal employee, or eliminate a federal employee’s position without hearings, testimony, or due process," Reps. Don Beyer (D-Va.), Steny Hoyer (D-Md.), Gerry Connolly (D-Va.), John Delaney (D-Md.), and Delegate Eleanor Holmes Norton (D-D.C.) said in a press release. "[W]ith this rule House Republicans would instead treat these civil servants like political pawns and scapegoats."

The House rules, including the Holman Rule, were adopted Tuesday by a vote of 234 to 193.

Again, the reinstatement of the Holman Rule is temporary, lasting only for the first session of the 115th Congress, or the 2017 legislative year. But its revival is a trial run that could lead to spending cuts for federal agencies that often run roughshod over congressional authority in Article I of the Constitution, as well as achieve the goal of reducing federal spending as the national debt approaches $20 trillion.