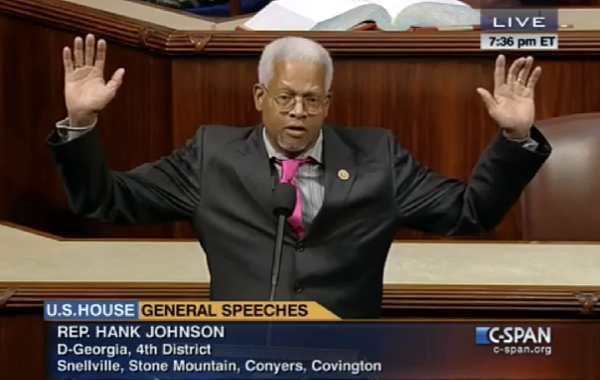 Rep. Hank Johnson (D-GA) has a history of making peculiar remarks that have often become the butt of jokes on talk radio. In a 2010 committee hearing, for example, he expressed his "fear" that Guam would "tip over and capsize" due to overpopulation. In April 2013, while the lower chamber was debating the Helium Stewardship Act, he told his colleagues to "[i]magine...a world without balloons."

Johnson, who is this author's congressman, claims that he was speaking in jest on both occasions, though that's certainly up for debate. But, more recently, the Georgia Democrat made another pretty ridiculous statement about the United States' heavy regulatory burden that defies common sense.

On Monday, Johnson testified against the Regulatory Accountability Act, a measure that would, according to a joint press release from its sponsors, Reps. Bob Goodlatte (R-VA) and Collin Peterson (D-MN), "requires federal bureaucrats to adopt the least costly method to effectively implement the law." The legislation, which the White House opposes, also mandates that federal agencies to give advance notice of proposed rules that would have an economic impact of more than $100 million.

American businesses and consumers face a $1.8 trillion regulatory burden, not including the $181 billion in new and proposed regulations the Obama administration rolled out last year.

These regulations cost the American households an average of nearly $15,000 each year. "This," Wayne Crews of the Competitive Enterprise Institute notes, "exceeds every item in the household budget except housing -- more than health care, food, transportation, entertainment, apparel, services, and savings."

Some big businesses may be able to absorb regulatory costs, but others can't. Many businesses, especially smaller ones, pass these costs to consumers and/or reduce their overhead costs, often meaning job cuts. Obviously, these factors hold back the economy from living up to its full potential because there is less money available for consumers to spend and for businesses to invest and expand.

It seems that Johnson, who represents part of a Metro Atlanta area with a 6.5 percent unemployment rate, is living up to his well-earned reputation of being the most "clueless" member of the House.