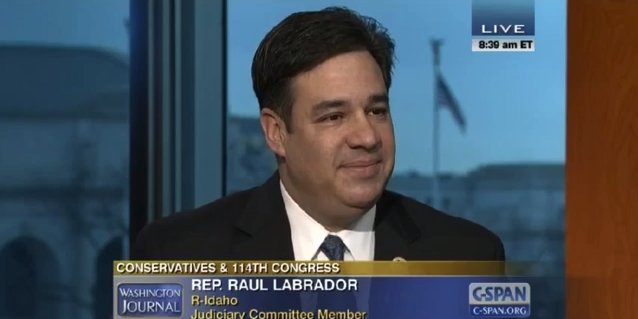 The Republican Study Committee was once considered a strong fiscally conservative caucus that sought to advance good policy in the House. Over time, however, it has become listless. Its ranks have swelled with members who have mixed voting records on fiscal issues and its chairmen have become more amenable to the lackluster agenda pushed by House Republican leaders.

On Tuesday morning, Labrador joined CSPAN's Washington Journal to talk about the House Freedom Caucus and Americans' frustrations with Congress.

"We have a concern that both parties -- both Republicans and Democrats -- come to Washington, DC saying that they're working for the little people, but when they get here, what they really do is they work for special interests. They work for the people that give more money to their campaigns," said Labrador. "What we want to do is represent the people back home. We want to let the American people know that we believe in the things that they're saying. We understand the frustrations that they have. We're just as frustrated as they are."

Though he said that the Republican Study Committee "still has a mission," Labrador explained that it "had become more of a debating society" in the last few years and had "grown too large to be effective."

"[P]eople go in and they talk about the issues," he noted, "but they don't really push leadership for more conservative, or more freedom legislation." That's something that the House Freedom Caucus plans to do. Its founding members have frequently introduced or supported various pieces of legislation that promotes individual liberty, reduces spending and regulation, and takes on the crony special interests that so heavily influence Washington. This, however, will be a more collective effort to influence the policy discussion.

Labrador, in response to a question about President Obama's unrealistic FY 2016 budget proposal, told the Washington Journal that the House Freedom Caucus will have a budget task force, noting that some of its members are experts in the area. "This president is not serious about what's happening in Washington, DC," said Labrador. "The American people want less spending, less government, [and] less regulation, and what this president wants is more of the same."

The House Freedom Caucus, which is still in the midst of organization, could seek its ranks grow to as many as 40 members. Assuming they stick together, a bloc that size would be significant enough to stop the 246-member House Republican Conference from passing bad policy and, perhaps, push party leaders to work with them to develop a bold, liberty-driven agenda.