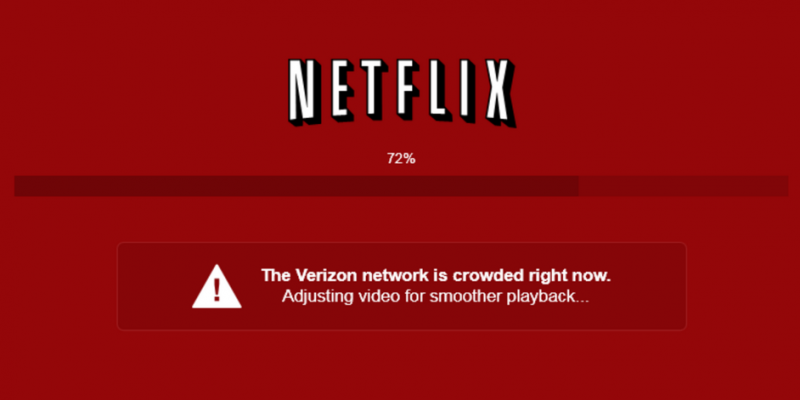 Early on in the net neutrality fight, Netflix had been one of the most vocal opponents to any such preferential treatment of content. Of course, this opposition to various payment brackets for content would mean that, regardless of what content the users were streaming, the host companies could not take steps to compensate for high traffic and data consumption, such as downgrading the streaming quality to slightly lower resolutions. While both companies and consumers stood to benefit from creating a market out of different streaming qualities, Netflix spoke out against the bogeyman of “throttling” and other such practices.

However, it has recently been found that Netflix has been do exactly what they have publicly opposed for so long, that is, altering the streaming quality in times of high data traffic. In particular, Netflix had been secretly reducing the streaming quality for users on the AT&T and Verizon networks as they approached their data caps. The company says that they did this to prevent users from incurring large fees for exceeding their network data caps. Interestingly, the other two largest cell phone networks, T-Mobile and Sprint, weren’t affected by Netflix’s practices because, rather than imposing data cap fees, the companies often independently reduce streaming quality during times of high data consumption.

Of course, despite the public hypocrisy and misleading of customers, nothing Netflix did is actually illegal, according to the FCC’s Open Internet Order. Rather, only broadband providers are regulated by the regulation, while edge providers and other online companies aren’t held to such standards. As such, Netflix can, in fact, reduce streaming speeds in order to prevent customers from accruing high costs (Netflix has actually been a strong supporter of various zero-rating programs, such as T-Mobile’s Binge On, in an effort to provide affordable streaming capabilities to customers).

So, despite Netflix’s own public testimony against the oh-so-scary practices of “throttling”, the recent developments actually demonstrate benefits to the consumers, in the form of avoiding data fees. So, if Netflix, one of the biggest advocates for net neutrality, is actively subverting guidelines set by net neutrality, do the Open Internet Order and other such efforts even have legs to stand on anymore? Aside from the deceptive practices, most Netflix customers would certainly prefer to have downgraded video quality than to pay high data fees. Those consumers that would prefer the higher fees, though, should be given the opportunity to pay a higher price for greater content streaming capabilities. Clearly, some middle ground between the two, as well as other options, can be reached through the free market, but not if net neutrality continues to stand in the way.

The market for different streaming brackets is quickly emerging, and net neutrality is preventing consumers from getting what they want. If it takes a high profile case of hypocrisy, on the part of Netflix or other such companies, to show that the market works better that way, so be it.

Netflix is always my favourite to go streaming advisor actually, I used to watch a lot of movies on netflix but now I have shifted my focus to morph tv (https://morphtv.org/) as it provides a lot more and better stuff for free; by the way, net nuetrality has a great impact among people.

The issue of Net Neutrality is big in the news these days, with the president calling for increased internet regulation from the Federal Communications Commission (FCC). But the Net Neutrality debate is far from a new one, and has in fact been raging for many years. Ever since its inception, the internet has had to fend off government attempts to control the information superhighway.