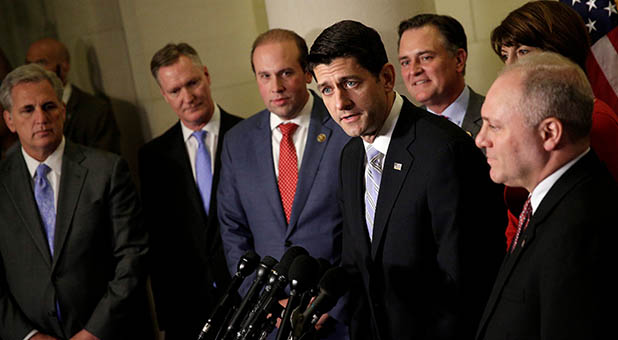 A new poll finds President Obama's health care mandate is so unpopular, it gets less respect than Rodney Dangerfield.  More than 8 in 10 people surveyed - 82 percent - say the federal government should not have the power to ﻿require Americans to buy health insurance.

Yet another federal judge -- this one in Pennsylvania -- has ruled that the individual mandate in President Obama's health care overhaul is unconstitutional.

Tax Cuts May Not be Enough to get the Private Sector Moving. Obama’s jobs speech on September 8, 2011 sparked interest in the ears of both Republicans and Democrats. One of the highlights included yet another reduction in the payroll tax. Obama claims that this will put more money into the pockets of the American people, stimulate the economy, and decrease uncertainty. “It will provide a tax break for companies who hire new workers, and it will cut payroll taxes in half for every working American and every small business.

The “pesky” law of unintended consequences strikes again. Do you remember when President Obama said “if you like your health care plan, you can keep it”? Just as we expected, ObamaCare will not live up to its grand promises.

Should we surgically repeal the individual mandate? YES

In a blog post today, Avik Roy reports that in the debt ceiling hike discussions, President Obama is willing to entertain a request by House Speaker John Boehner to repeal the individual health care mandate.

Yesterday's decision proves once again we cannot count on the courts to overturn ObamaCare.    On a 2 to 1 decision, the US Sixth Circuit Court of Appeals upheld the constitutionality of the individual mandate -- the ObamaCare mandate requiring everyone to purchase government-controlled health insurance.

Today in the metro I read a quote by Senate Majority Leader Harry Reid about the election results in NY-26.  “Last night the people of New York’s 26th District resoundingly spoke.  My question to my Republican colleagues is very simple.  Will you listen to the American people?  Because their message could not be clearer.” Democrat Kathy Hochul won running on a campaign that Paul Ryan’s budget would end Medicare.  The story is significant only because it happened in what has typically been a solid republican district.  I’ll address the Medicar

0
05/26/2011
Get Out of Obamacare Free!!!
"https:\/\/www.freedomworks.org\/content\/get-out-obamacare-free?social=facebook_share"
null
https://fw-d7-freedomworks-org.s3.amazonaws.com/styles/thumbnail/s3/te_social_media_share/fw_default_0.jpg?itok=35IWEBMb
Issue Analysis

Get Out of Obamacare Free!!!

Claude Frédéric Bastiat was a nineteenth century French political and economic philosopher who warned the people in his writings about the dangers of the abuse of law and the nature of government.  Bastiat states that the law should be established only to protect a citizen’s life, liberty, and property.  Furthermore he w