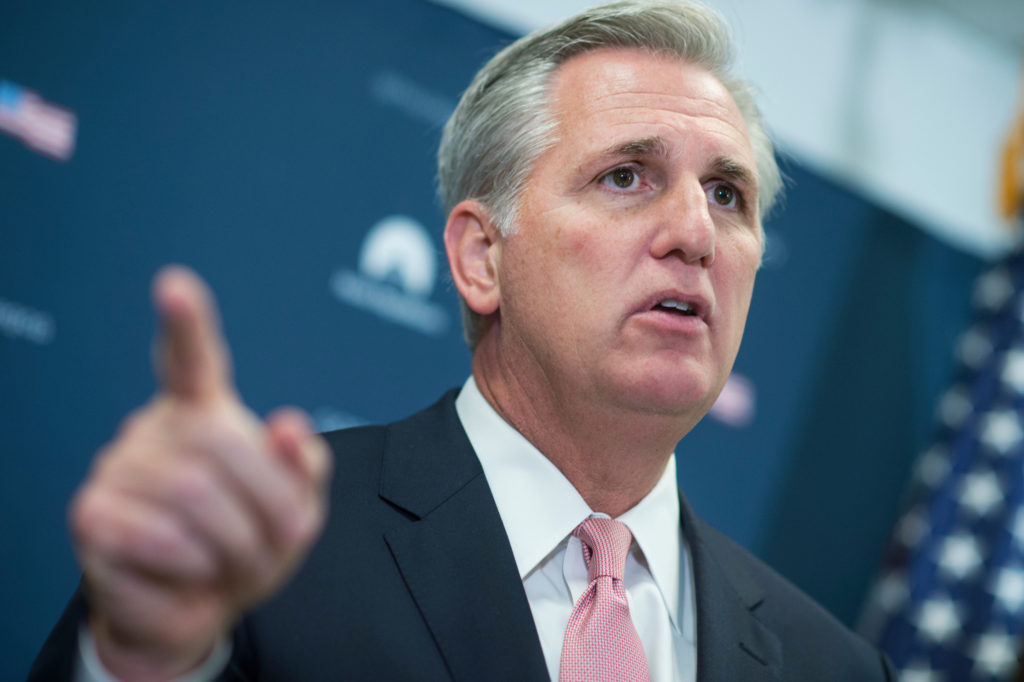 Assuming Ryan doesn’t step aside before the end of his term and Republicans keep control of the House of Representatives, Republicans will choose their candidate for speaker at some point after the election, likely in mid-November. The election that will be held at the beginning of the 116th Congress on January 3, 2019 will be between the Republican and Democratic nominees for speaker, plus any other candidates who members vote for.

Now, some may think this is a done deal; that Majority Leader Kevin McCarthy (R-Calif.) has this in the bag. After all, he has the endorsement of Speaker Ryan. Majority Whip Steve Scalise (R-La.) has said he wouldn’t run against McCarthy and will back him in the conference election. That said, Scalise still could find himself to be a contender because, put simply, McCarthy has been here before.

The House Freedom Caucus will once again play a role in determining the next speaker. With roughly three-dozen members, this group of House conservatives can determine the outcome of the conference election for speaker.

The type of candidate the House Freedom Caucus would support is one that would return the House to regular order. This means passing all 12 appropriations bills separately, as well as allowing an open amendment process on legislation considered on the floor.

The House Freedom Caucus was founded in January 2015 predominately out of concerns related to process. For example, the resolution, H.Res. 385, that would have removed Boehner as speaker cited severe problems with the legislative process in the House. The issues cited include the proclivity of then-Speaker Boehner of governing by crises and failing to “comply with the spirit of the rules” of the chamber.

Little has changed since Boehner relinquished the gavel. Although Speaker Ryan promised a “more open, more inclusive, more deliberative, more participatory" process, legislation has been pushed through often by preventing or limiting amendments that can be considered from the floor. One could even argue that the process has gotten worse because of Speaker Ryan’s reliance on the House Rules Committee to stifle members’ ability to fully engage in the legislative process.

Some would argue that use of rules is necessary to prohibit Democrats and some Republicans from offering amendments that may hurt vulnerable Republicans. No one said being a member of Congress was easy. Tough votes may occasionally come up. This is a feature, not a bug, of the system.

In total, 789 amendments were allowed to proceed to the floor, 590 of which were offered to three bills. Keep in mind that these aren't all the amendments that were offered. Only one of these bills, the National Defense Authorization Act for FY 2018, H.R. 2810, became law. The other two, H.R. 3219 and H.R. 3354, were consolidated appropriations bills that were never considered by the Senate.

It’s not only that the process is closed off to members. Legislation continued to be rammed through the House at or near the last minute, as Congress approaches a crisis. Spending bills passed since September have come within a day or two of a government shutdown. Two of these bills, H.R. 601, and the recently passed omnibus, H.R. 1625, also included suspensions of the debt limit, allowing the Department of the Treasury to borrow at will.

The omnibus wasn’t only an example of governing by crisis; it was also pieced together in the worst possible way. Few knew what was in it before it was revealed on Wednesday, March 21 at almost 8:00 pm. Members were expected to vote on the 2,232-page bill the following day. The rule governing the bill, H.Res. 796, suspended the requirement that a bill sit for three days before consideration on the floor. No one had read the entire bill in the near 16 hours between its release and the vote at 12:59 pm on Thursday, March 22.

McCarthy, who has a 66 percent lifetime score on FreedomWorks’ Congressional Scorecard, has been complicit in the abandonment of regular order and the rise of bad process in the House. He has served as majority leader since August 2014, assuming the role after former Majority Leader Rep. Eric Cantor (R-Va.) resigned after losing his primary race. He previously served as majority whip, the chief vote counter for the conference.

Rep. Raul Labrador (R-Idaho) launched an unsuccessful challenge to McCarthy for majority leader in 2014. Part of Labrador’s theme was “bring[ing] the Republican conference together.” The role McCarthy has played in the current leadership team and the broken process it has overseen, which has only led to more frustration in the conference, makes McCarthy an unacceptable choice for speaker.

Scalise is another member of the leadership team who could be an alternative should McCarthy fail to get enough support from the conference to get him to 218 votes. Scalise, who has an 82 percent lifetime score with FreedomWorks, served as chairman of the Republican Study Committee (RSC) from January 2013 to August 2014. He resigned from the chairmanship of the RSC when he was elected as majority whip.

The Louisiana Republican has been a source of inspiration after coming back from the June 2017 shooting in which he was seriously injured while practicing for the Congressional Baseball Game. His return to the House in September was heartwarming.

Scalise is certainly well-liked by his colleagues, but he does have the disadvantage of being part of the current leadership team. What’s more, some conservatives believe that the RSC began a period of decline under Scalise’s chairmanship, who was viewed as leadership’s pick for that post. Once the beacon of fiscal conservatism on Capitol Hill, the RSC’s previously bold colors faded under his leadership. Current RSC Chairman Mark Walker (R-N.C.) has worked hard to return the RSC to form, and we applaud his efforts.

Although he has yet to announce that he will run for speaker, Rep. Jim Jordan (R-Ohio) has expressed interest in the job. Jordan is a founding member of the House Freedom Caucus and its first chairman. He served as chairman of the RSC from January 2011 to January 2013. He has a 97 percent lifetime score with FreedomWorks and has earned 100 percent scores for the past four years, from 2013 through 2017.

Jordan, a member of the Judiciary and Oversight and Government Reform committees, is known for his tough questioning of witnesses. His commitment to fiscal conservatism proven beyond a shadow of a doubt. He is also a fierce critic of leadership’s abandonment of the process in the House. Needless to say, the grassroots would have an ally holding the gavel if Jordan were elected speaker.

Other candidates may emerge. During the last speakership election, Rep. Daniel Webster (R-Fla.) received the House Freedom Caucus’ endorsement. He previously served as Speaker of the Florida House of Representatives and has called for a more open process in the House. Webster has a 71 percent lifetime score with FreedomWorks. Reps. Rob Bishop (R-Utah) and Chris Stewart (R-Utah) have also been floated as dark horse potential candidates. Bishop and Stewart have 77 percent and 73 percent lifetime FreedomWorks scores, respectively.

House Republicans have to choose a speaker who will open up the process, allowing amendments to legislation and passing the 12 appropriations bills separately, and who will help decide what the GOP will be going forward. Electing a member of the current leadership team, which has completely abandoned any semblance of regular order, would be the wrong choice.