How to Create Your Own "Sharknado" Social Media Storm 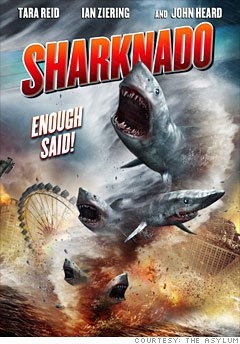 If you spent any time on Twitter last week, you heard about a movie called Sharknado, a low-budget affair made for the SyFy Network. I wouldn't dare spoil the intricate and gripping plot of the movie but the climax of the picture involves former Beverly Hills 90210 heart-throb Ian Ziering, a giant flying shark, and a chainsaw.

Casablanca it was not.

It was, however, an absolute smash on Twitter, where the tweets flew like, well, sharks from a freak tornado. According to Patrick Ruffini, users of that social media platform mentioned the movie well over 5,000 times a minute. No one expected it. I'm absolutely sure the network didn't plan for that much success. The director of the picture was flabbergasted.

Five. Thousand. A minute. A Game of Thrones territory.

That's the kind of excitement you'd like for your rally or town-hall meeting, right? Right. RIGHT!

Naysayers have pointed out those tweets didn't exactly translate into viewers. Sharknado drew roughly 1.4 million viewers, respectable for one of SyFy's original movies (and more people than watched the return of Derek Jeter to the Yankees' lineup), but certainly not the numbers you would expect from a 5,000 tweets-per-minute event. The obvious lesson here is that Twitter fame does not transfer easily to "the real world", right?

As usually happens, the story of TwitterNado needed a couple more days to sit before we saw the real story. Indeed, the Twitter buzz didn't bring viewers flocking (though 1.4 million viewers is nothing to sneeze at), but that's not what social media buzz during an event does. You don't tweet about an event to bring people to the event -- that's what pre-event publicity and marketing does -- but to build a community inside the event. Or, as Moe Lane tweeted after the movie, "[p]eople kept doing it because it's fun to hang with each other online". Community is the best end result of any social media campaign. (Tweetable). Community is what brings people back to you after you've made that one big splash. Community is what brought in latecomers to the party like Kathleen Sebelius, the National Weather Service, and the EPA.  Community is what will bring people back to the SyFy network to check out one of their other horribly-goofy original movies.

There's more. The Twitter feeding frenzy gave the network enough confidence to re-air the movie this week -- something I don't believe it's ever done as quickly with its other original movies such as Mansquito, Sharktopus, or Mega Croc vs. Gatoroid (with Debbie Gibson and Tiffany! Giant CGI monsters and 80s pop stars!). As well, the network is in talks with the filmmakers to make a sequel, which I believe is another first for the "original pictures" brand. Let's not forget that dozens of news articles that introduced hundreds of thousands of people to SyFy original movies, The Asylum, Thunder Levin (the writer and yes, that's his real name). Social media made all that happen, for the price of, what, a few in-house commercials and Tweets from the network?

SyFy walked into an accidental cult movie hit that will generate more jobs and more money for more people than anyone ever expected thanks to a humongous social media community that sprang up unplanned and unasked for. Should we ignore the Sharknado-nado as a freak event? I wouldn't if I were you, because there are elements of what SyFy did to prepare for the movie that we can use ourselves. No matter if you're a local activist who wants to get a bit of attention for your petition drive or a candidate who wants to get a little momentum behind you, the Sharknado Effect is something you can try to replicate yourself. I say "try" because the social media storms are as unpredictable as their real-life counterparts, but you can seed the clouds, so to speak, to increase your chances. Here are four things to consider.

1) Make it easy to share. SyFy capped its tweets with the #Sharknado hashtag then let the hashtag go free. If you didn't know about the movie, you at least knew about sharks and tornados. Hopefully, mashing the two together in one odd word would make you wonder what the heck it was all about. I saw plenty of tweets a day or two before the movie aired asking what the heck #Sharknado was. Lots of them who were not regular SyFy viewers took part on Thursday night because #Sharknado was ridiculously easy to share. Had a bad day at work? Blame it on #Sharknado. Weather looking a bit shady this afternoon? Look out for the #Sharknado! Don't like #Sharknado? Come up with your own mashup movie (Blizzaardvark anyone?) and slap the hashtag on it. Sharable. Easy.

2) Make it fun. Folks tweeted about Sharknado because what's not fun about the concept of downtown Los Angeles menaced by a sky full of tornado-flung sharks? People embraced the inherent silliness of the premise, amplified it, spun it into all sorts of silly (and sharable) permutations, and generally went to town. You may not want the enthusiasm for your event to go that far over the top (but maybe you will) and a good chunk of politics is serious business, but serious does not have to mean boring. Find the fun element in what you're doing, or create that element if none exists, and make sure people see it. Fun has a way of pulling people toward it, even if its small.

3) Make it something around which a spontaneous community can form easily. It's tricky to know what will attract people on social media and harder yet to predict exactly what will go "viral" and pull hundreds or thousands tweets a minute. You have a better chance of getting that little viral moment, though, if you give people a "place" around which they can gather friends. A television show, a movie premiere, a short conference, a speech -- all can serve as places around which people can gather for a couple of hours. Put together a hashtag, perhaps have a few people live-tweeting the event, broadcast it if at all possible, and give people a ready place to share what they see with their friends. That's all you can do. The community will form or it won't, but it surely won't form if you don't give it a place to form. But once it does, it'll only hold together for a little while, so watch it while it's there so you can...

4) Follow up. SyFy didn't sit back and bask in the warmth of Sharknado afterglow. Its marketing and programming departments jumped on the success they created over the weekend. They announced a re-broadcast date (Sharknado viewing parties, anyone?) and put out word about the sequel talks. The director and writer jumped on interview opportunities early. Everyone involved knew it was important to tell folks more about who they are and what they are doing while everyone was looking in their direction. When your event goes Full Sharknado, you can be sure the excitement won't last, so don't lose the opportunity to burrow a little bit deeper into peoples' memories with a few well-places news items or interviews.

Now, go forth and create your own Sharknado. But leave Blizzaardvark alone. That's my baby.

Hehe Such a nice post and i am really appreciate your work. You may check my blog http://www.webhostingreviewsx.co.uk/b2b-social-media-strategies/ , where i have shared some points on social media Strategies that can help you to promote a business or a person.

0
08/28/2013
What Can We Learn from Duck Dynasty?
"https:\/\/www.freedomworks.org\/content\/what-can-we-learn-duck-dynasty?social=facebook_share"
null
https://fw-d7-freedomworks-org.s3.amazonaws.com/styles/thumbnail/s3/te_social_media_share/fw_default_0.jpg?itok=35IWEBMb
Blog

What Can We Learn from Duck Dynasty?

Last week, almost twelve million people tuned to the A&E channel for the fourth season premiere of Duck Dynasty, a record for a "non-fiction cable series".

0
08/12/2013
My Language, Do You Speak It?
"https:\/\/www.freedomworks.org\/content\/my-language-do-you-speak-it?social=facebook_share"
null
https://fw-d7-freedomworks-org.s3.amazonaws.com/styles/thumbnail/s3/te_social_media_share/fw_default_0.jpg?itok=35IWEBMb
Blog

Four Things I've Learned From Being a Bad Blogger

When I started my blog, The Suburban Sundries Shack*, on blogger back in 2004**, there weren't a lot of "how to blog" guides floating around on the internet.