How Free Is Your State?

Now that America is guaranteed another three-and-a-half years of liberal leadership in the White House, individuals and businesses are eager to reduce the burden of government any way they can.

Big Government isn’t confined to that federal district on the East Coast we hear so much about. It also lurks in the extra taxes you pay for a gallon of gas, the paperwork you have to file to start a business, and the restrictions you face when you want a Big Gulp. 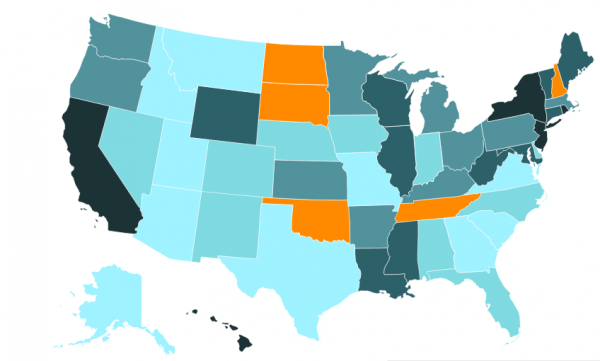 With so many rules and regulations flooding out of Washington, D.C., wise Americans are avoiding the additional red tape pouring out of our state capitals, county offices and city halls.

To help in the fight, the Mercatus Center has released Freedom in the 50 States. In this latest edition, Will Ruger and Jason Sorens scored each state on more than 200 metrics covering both economic and personal freedoms. From tax rates to business licenses to gun control to property rights, this study covers freedom from every angle.

And instead of just issuing a dull white paper, Mercatus created a fun, interactive map that allows you to see how states have changed over time, drill down on your pet issues and even create a list of your own.

So, who came out of top?

North Dakota, according to the freedom index, is the freest state in the United States. It scores exceptionally well on regulatory and fiscal policy. Moreover, North Dakota scores slightly above average on personal freedom. It is also the state that improved the most over the last decade.

Still, the authors note that the Peace Garden State can increase liberty further by reducing the size of the government sector and eliminating unnecessary occupational licensing.

And the lowest branch on the liberty tree?

New York is by far the least free state in the Union. It is therefore no surprise that New York residents have been heading for the exits: 9.0 percent of the state’s 2000 population, on net, left the state for another state between 2000 and 2011, the highest such figure in the nation. New York has, by a wide margin, the highest taxes in the country…[and] is also the most indebted state.

But even the home of Cuomo and Bloomberg can unchain their citizens by reducing spending, paying down debt, abolishing rent control, and… well the list is too long to reprint here.

My home state of Arizona is the most improved from the 2011 report, jumping 12 spots, while Oregon plummeted a shocking 16 points. Further delving into the data reveals some interesting facts:

Whether they realize it or not, all states are engaged in a contest of competitive federalism. If governors and legislators want to attract more residents and businesses, they better work hard to improve their score for the next freedom index.