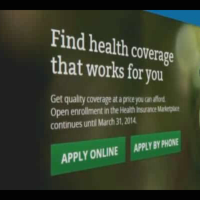 Earlier this year, Obama touted that 8 million people had enrolled in ObamaCare but recent data from the Health and Human Services Department shows that number was too high.

The difference in the number centers around the definition of enrolled. Obama’s estimate is higher because it included all the individuals that signed up including a portion of individuals that did not pay the insurance premium.

In testimony before a congressional committee, Marilyn Tavenner, Administrator of the Centers for Medicare and Medicaid Services, said 7.3 million Americans paid premiums as part of their enrollment.

The difference between signing up and paying for insurance is obviously an important distinction.

Robert Laszewski, of Health Policy and Strategy Associates, said, “I’ve talked to a number of insurance companies around the industry and they’re indicating that they’re down as low as 70 percent of the original enrollments they had.”

In fact, Mark Bertolini, the CEO of Aetna, the nation’s third largest insurer, said recently that his company had 720,000 people sign up for exchange coverage as of May 20, but only 600,000 turned out to be paying customers.

He added he expects that number to fall to “just over 500,000″ by the end of the year. That would leave Aetna’s paid enrollment down some 30 percent from its original sign-up numbers.

The falling enrollment baseline for 2014 is going to make it harder for the administration to meet the 13 million total enrollments in 2015 that was estimated by the Congressional Budget Office.

The political spinning continues to surround ObamaCare but over time the truth will be known.

Let us not forget that OCare allows patients to get care for 90 days after they've paid their last premium. Clinics may not get notified about deadbeat OCare enrollees for 90 days -- leaving clinics to attempt to collect unpaid care provided from these deadbeats. However, the deadbeats can sign up for care at the next enrollment and may not be penalized because deadbeatism is a preexisting disease -- or something. Just another way that OCare will make it harder and more expensive to get quality care...