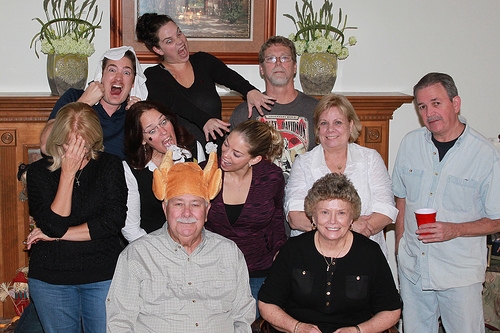 By now, you’ve heard how President Obama’s band of glassy-eyed minions, in an effort to suck every possible ounce of joy out of your life, want your wacky progressive relative to harangue you about how awesome Obamacare is. Organizing for Action put out an entire set of talking points, which can be summed up in three bullet points:

Not to be outdone, Michael Bloomberg, who you might recall as the guy whose anti-gun group took a royal beatdown in the Colorado recall elections, wants your Thanksgiving Day to be full* of food, family, and fear of handguns.

So, instead of a mostly-harmonious holiday gathering where the arguments will revolve around which child’s career is a greater disappointment or whose husband is a worthless lout (you know, normal American family arguments), President Obama, Michael Bloomberg and the rest of the “get in their face” gang want to turn Thanksgiving into May Day. You know, that much-beloved holiday where everyone marches to the same music, chants lovely poems about the Beneficial State, and grouses about how the evil capitalists have the working man under their hobnail boots.

Oh joy and rapture. Get me my furry hat and my marching boots and let me in on that parade, eh comrade?

The propaganda onslaught is coming and you have a few different ways to handle things when crazy, Obama-loving, “mmm mmm mmm”-singing, Cousin Weak Chin interrupts grace to read from the talking points. You can rhetorically roast him to a cinder with a variation of the responses helpfully provided by Ace of Spades, you can roll your eyes in frustration and wallop him with snark as the Hemingways recommend, or you can try a third way.

Bone up on the fundamentals of liberty and our Constitution and calmly eviscerate his tired ramblings in between bites of delicious turkey, mashed potatoes, and stuffing. Here are two places you can get a quick but excellent reminder of why we’re free to celebrate Thanksgiving and why Obamacare is a wicked construction that must be burned to the ground.

1) Bill Whittle’s “What We Believe” series. If you’re not familiar with Bill Whittle, you’ve missed one of the most intelligent and erudite speakers in the conservative movement. Start with his video on Small Government and Free Enterprise, which runs about ten minutes. By the time he’s done, you’ll have plenty to stop Cousin Obamabot in his tracks when he starts in about the glories of government-run health care and the evils of “banksters”. This series runs seven parts, none of which is particularly long. The videos are well-produced and Whittle does a great job of laying out what conservatives really believe and why.

2) Freedom University. Did you know FreedomWorks has its very own educational video series? It does, and you can get through an entire course in an easy afternoon. I recommend you start with the seven-part course on Economics, which will take you through the basics of incentives, entrepreneurism, and plenty more. FreedomWorks has done quite a good job setting up each course to work like a regular college tele-course, with quizzes and tests to make sure you understand the subject. Once you’ve knocked out the economics course, you can step up to other courses on government or move to their solid beginner’s courses on activism. You'll have to join Freedom Connector to sign up for the courses, but...wait...you haven't already? Go do that now. Hurry!

You can't stop your progressive relation from trying to do the President's will, but you can cut him off at the knees, metaphorically-speaking**.  Just remember to be polite to everyone else at the table who just want a family dinner without screaming, yelling, and crying. We are conservatives. We act right, right?

*So long as you don’t serve trans-fats, your drink glasses hold less than 32 ounces, and you run a few laps after dinner to burn off the calories.
**Seriously, metaphorically ONLY.