In a ruling issued earlier this month, the Office of Personnel Management, at the behest of President Obama, issued a ruling that would allow Congress and their staff to escape parts of the Obamacare threat that would have left them facing a possible loss of benefits and sharply higher costs for premiums.

These are the same threats the rest of America also worries about.

The fact that Congress was able to back out of a health care reform law that they took part in forcing upon the American people is a stunning, yet consistent abuse of power carried out by Democrats under this administration, since the debate was intitiated.

The act, as Public Policy intern, Andrew Montgomery, points out, is ensconced in hypocrisy.

"Congress should have to live under the same laws it makes for the rest of us," he writes.  "If Congress can legislate upon the American people and be free of the consequences, they become an 'elitist class' out of touch with reality and their constituents."

True.  The fact remains however, that our lawmakers do not abide by the same rules and regulations that they decide for us.  And they have lost touch with their constituents.  It has and always will be, Obamacare for thee, but not for me.

The question now becomes, what can Republicans do to turn this into a polling advantage heading into 2014?

In Iowa last week, the National Republican Senatorial Committee (NRSC) may have provided a glimpse at the proactive fight coming to Democrats running for election in the upcoming election cycle.

A new series of ads and on-the-ground outreach is targeting Iowan Rep. Bruce Braley and the Obamacare exemption, highlighting the Democrat's efforts to pass the health care legislation at the expense of some vulnerable groups amongst his constituency.

An NRSC mailing explains:  "This will be a major issue in the 2014 elections and we are wasting no time informing voters about the Democrats' hypocrisy."

"It starts today in Iowa where we are launching several grassroots initiatives."

The grassroots initiative involves multiple billboards across the Hawkeye State, walk cards to be distributed to fairgoers at the Iowa State Fair, and a website designed exclusively to highlight Braley's "reckless record" as a key supporter of Obamacare.

Each of these efforts has a baseball theme.  But unlike the famous Field of Dreams in Dubuque County, Braley's record represents more of a Field of Nightmares.

There are four billboards, each with a scoreboard that has "Braley's Obamacare" up 1-0 on constituents such as farmers, families, seniors, and small businesses.

The walk cards continue the theme by representing baseball cards.  Each has Obamacare leading the game over Iowans, and shows a three pitch strikeout by Braley in his votes regarding the law. 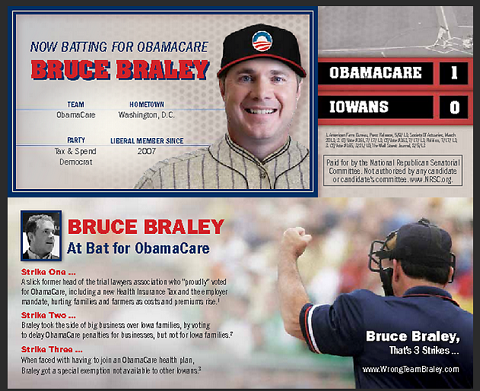 And the website, WrongTeamBraley.com, combines all of these elements, giving a more extensive view of why being on the side of Obamacare, means being on the "wrong team."

She added, "Braley is on the wrong team for Iowa."

While the effort to highlight Obamacare hypocrisy begins in Iowa, it certainly won't be limited in-state.  Democrats can expect to see more of this heading into 2014.

"We will not stop there -- all Democrats running for Senate will be forced to explain," an NRSC e-mail reads.

As well they should.  Braley and his collegaues on Capitol Hill have no right to breathe a sigh of relief by escaping the clutches of Obamacare, while the rest of America collectively holds their breath nervously, awaiting the true impact this law has on their health care and personal finances.