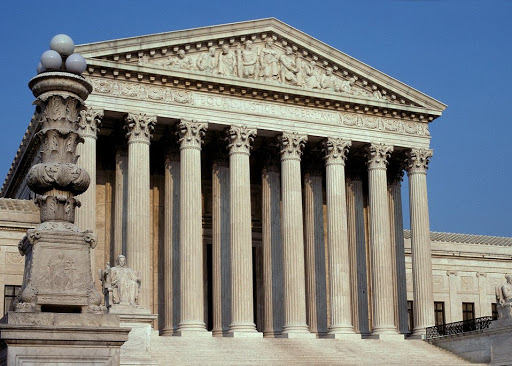 The Supreme Court may soon decide whether to accept several cases related to qualified immunity, a purely legal doctrine with no basis in federal statute that shields federal, state, and local officials who claim a “good faith” defense from civil actions in federal court when an individual’s rights are violated. Although police officers most often cited as examples of government officials who receive qualified immunity, it may apply to any government official.

Federal law (42 U.S.C. 1983) provides a private right of action for individuals whose rights are deprived by any individual acting in his or her official state and local government capacity, including law enforcement. This law was part of the Enforcement Act of 1871, which was passed to combat the Ku Klux Klan and white supremacy after the Civil War. The text of the 42 U.S.C. 1983 states:

“Every person who, under color of any statute, ordinance, regulation, custom, or usage, of any State or Territory or the District of Columbia, subjects, or causes to be subjected, any citizen of the United States or other person within the jurisdiction thereof to the deprivation of any rights, privileges, or immunities secured by the Constitution and laws, shall be liable to the party injured in an action at law, suit in equity, or other proper proceeding for redress, except that in any action brought against a judicial officer for an act or omission taken in such officer’s judicial capacity, injunctive relief shall not be granted unless a declaratory decree was violated or declaratory relief was unavailable. For the purposes of this section, any Act of Congress applicable exclusively to the District of Columbia shall be considered to be a statute of the District of Columbia.”

However, in Harlow v. Fitzgerald (1982), the Supreme Court created the modern view of qualified immunity for public officials, essentially insulating them from civil lawsuits unless constitutional protections were clearly established. As Justice Lewis Powell wrote in his opinion for the Court, “[G]overnment officials performing discretionary functions generally are shielded from liability for civil damages insofar as their conduct does not violate ‘clearly established’ statutory or constitutional rights of which a reasonable person would have known.”

In Saucier v. Katz (2001), the Court clarified the test for qualified immunity. Justice Anthony Kennedy wrote, “[T]he first inquiry must be whether a constitutional right would have been violated on the facts alleged; second, assuming the violation is established, the question whether the right was clearly established must be considered on a more specific level than recognized by the Court of Appeals.” Subsequent case law has attempted to define this standard, but all we know is that an exact match of the case is not required, but that it must be “particularized.”

The threshold of “clearly established” statutory or constitutional rights is a difficult one for a victim of some action by a federal, state, or local government official to meet. The victim has to identify case law establishing that statutory or constitutional right. If he or she can’t find such a case, the government official, including a police officer, has qualified immunity from any civil action.

“Although innocuous sounding, the clearly established test is a legal obstacle nearly impossible to overcome. It requires a victim to identify an earlier decision by the Supreme Court, or a federal appeals court in the same jurisdiction holding that precisely the same conduct under the same circumstances is illegal or unconstitutional. If none exists, the official is immune,” write Patrick Jaicomo and Anya Bidwell of the Institute for Justice. “Whether the official’s actions are unconstitutional, intentional or malicious is irrelevant to the test.”

Other cases related to qualified immunity have been considered since Harlow. Few of these cases have denied qualified immunity to a government official and, because the standard is so high, victims may be discouraged from pursuing civil action.

The legal doctrine of qualified immunity is getting more attention against the backdrop of the deaths of Breonna Taylor, an innocent person who was killed in a botched no-knock raid in Louisville, and George Floyd, who was killed by a police officer in Minneapolis while three other officers watched. One doesn’t have to be a person of color to be angry by what has happened. As Majority Leader Mitch McConnell (R-Ky.) said on the Senate floor on Monday, “In no world whatsoever should arresting a man for an alleged minor infraction involve a police officer putting his knee on the man’s neck for nine minutes while he cries out ‘I can’t breathe’ and then goes silent.”

Certainly, the job of a police officer is a tough and stressful one. This author’s father was a police officer in the City of Forest Park (Georgia) and the City of Atlanta in the 1970s and 1980s. It’s not anti-law enforcement to ask that officers who commit acts that would otherwise be crimes be held responsible for their conduct. Any reputable law enforcement organization should be able to recognize that difference, for the sake of the vast majority of officers who are just as appalled by cases like the ones that cross the headlines.

It’s from this place that we must begin a serious, honest conversation about policing, an increased focus on de-escalation training, and revisiting the wide reach of qualified immunity. We should all condemn acts of violence against innocent property owners, but please don’t let the violence that we’re seeing take away from the peaceful protests in response to George Floyd’s death and need to address the problems in the criminal justice system.

On behalf of FreedomWorks’ activist community, I urge you to contact your senators and ask them to co-sponsor the Reforming Qualified Immunity Act, S. 4036. Introduced by Sen. Mike Braun (R-Ind.), the Reforming Qualified Immunity Act would restore the original intent of 42 U.S.C. 1983 and clarifies the judicial doctrine of qualified immunity created by the Supreme Court.