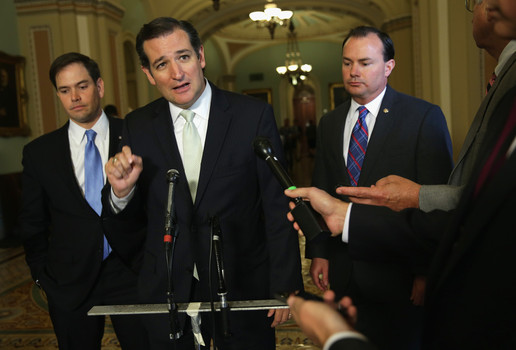 Senators Lee, Cruz, and Rubio stand up where others lie down.

Unfortunately, until now feckless leadership has stalled efforts to do anything meaningful. Establishment Republicans would rather not make waves than take an actual standing on stopping Obama’s health care takeover, as was evidenced by the endless carping over Sen. Cruz’s 21-hour floor speech intended to defund ObamaCare.

After Sen. Mike Lee convinced Majority Leader McConnell to promise to use reconciliation to repeal ObamaCare, things were looking up, but as the reconciliation package emerged, it was clear that conservatives were going to be in for a disappointment. After a tepid proposal from the House of Representatives, followed by a thorough cutting from the parliamentarian, it looked as if the final reconciliation bill would contain little more than a couple of minor tax breaks, without touching the Medicaid expansion and premium subsidies that form the core of the law.

The writing appeared to be on the wall: Republicans lacked the spine to do what they campaigned on and fight for a full repeal of ObamaCare. Thankfully, not everyone felt this way. In a joint release by Senators Mike Lee, Ted Cruz, and Marco Rubio, the three reformers pledged not to vote for the modest reconciliation package on principle, unless it was substantially amended to actually have an impact on ObamaCare. They wrote:

“Each of us campaigned on a promise to fully repeal Obamacare and a reconciliation bill is the best way to send such legislation to President Obama’s desk. If this bill cannot be amended so that it fully repeals Obamacare pursuant to Senate rules, we cannot support this bill. With millions of Americans now getting health premium increase notices in the mail, we owe our constituents nothing less.”

These missing three votes put the bill’s passage in jeopardy, and Mitch McConnell had no desire to be embarrassed by such a failure. In response, McConnell released a substitute plan that ends premium subsidies, phases out the Medicaid expansion, repeals several taxes, and reduces the penalties for the individual and employer mandates to zero.

Thanks to these three Senators, we should be able to finally send a bill to the president’s desk that stops the worst parts of ObamaCare, paving the way for real free market health care reform under the next president. This is a great example of how a small minority of principled voices can make a major difference in Congress. We’d like to thank and congratulate Senators Lee, Cruz, and Rubio for taking a stand, and hope that others will follow in their example on future votes.